Weeks i with a Humanistic Outlook - 2018 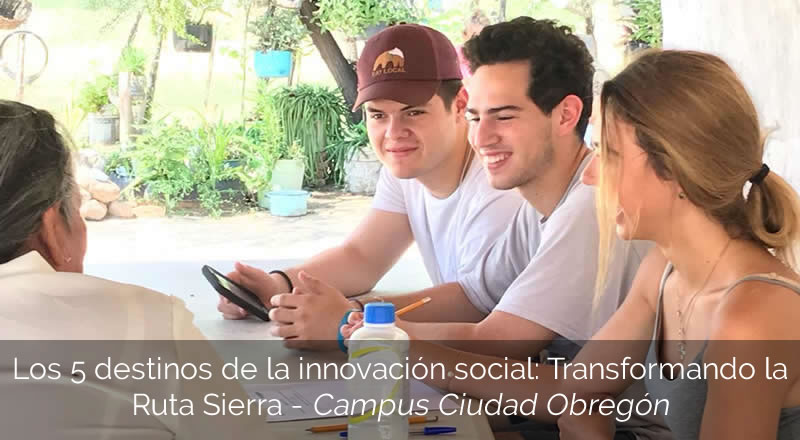 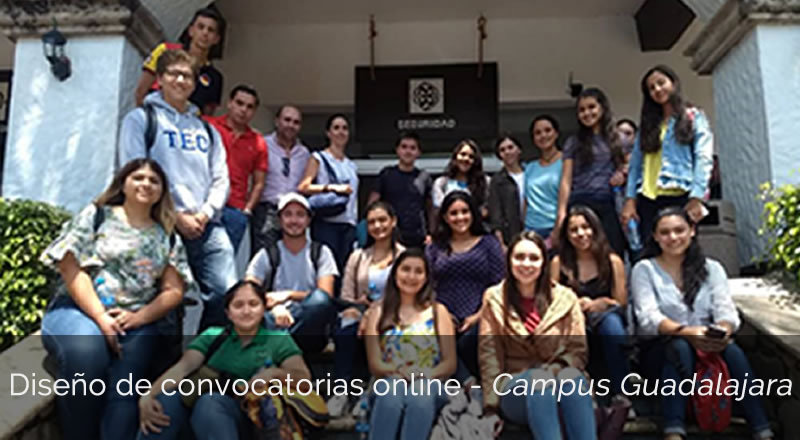 The Experience took place in the Bosques de San Isidro community in Zapopan, Jalisco. The problem addressed was to determine how this community could improve its relationship with its environmental setting, since it is located in the San Isidro Forest, a major green area for the Metropolitan Area of Guadalajara.

Students have to define the diverse online audiences that the nonprofit should be addressing, in order to be successful in encouraging and inviting them to support this organization’s cause.

a) Ethnography: the students studied the environmental situation of the Metropolitan Area of Guadalajara by reading two texts, then visiting the San Isidro community, located in the subdivision Fraccionamiento Las Cañadas, where they divided into six teams to learn the opinion of the people involved on the following topics, in order to gain greater insight and know how to design the most suitable online invitations:

b) Netnography: the students evaluated the organization’s online presence on its website and analyzed the messages sent by neighbors through the WhatsApp group .
c) The students experimented with different types of formats (result of the ethnography and netnography) to propose the most successful invitations on WhatsApp.
d) The students designed online invitations using the CANVA template (website with graphic design tools) to catch the attention of the diverse audiences of neighbors targeted by the Association via WhatsApp.
e) The students presented their proposals for online invitations to the members of the Bosques de San Isidro Neighborhood Association. They demonstrated why it is important to have just six key areas in the information sent by WhatsApp and to reinforce it with flyers and posters f) The students showed the importance of brief, well-written, engaging texts for the average audience who use WhatsApp in Las Cañadas: 37 years old
g) The invitations created by the students were very creative, with one team even including a video.
h) The education partners (representatives of the nonprofit organization) were satisfied with the students’ proposals and want to implement them, through the Communication students’ internships.
i)The beneficiaries are, first of all, the representatives who run the neighborhood association; secondly, the neighbors, who will be informed of priority topics that would lead to improvements in the environmental setting of Bosques de San Isidro; and, finally, the inhabitants of the Metropolitan Zone of Guadalajara, since protecting the forest and its fauna would ultimately result in the conservation of one of the city’s green areas. 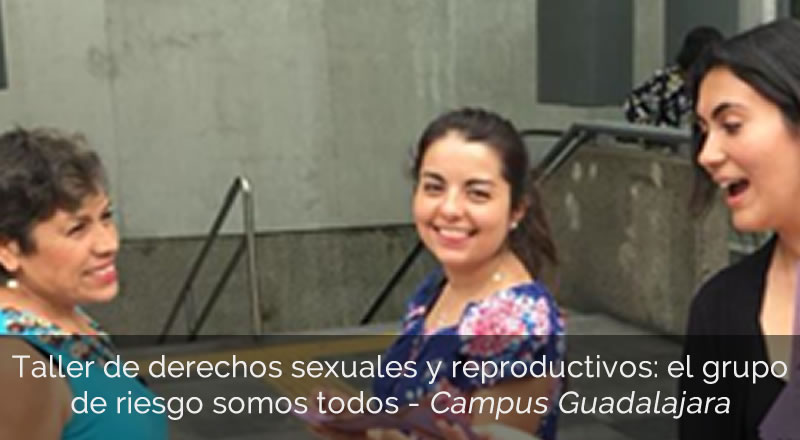 close
Workshop on Sexual and Reproductive Rights: We are all in the At-risk Group

To create awareness of sexual and reproductive rights as an issue related to the exercise of citizenship, through participation in workshops on the reality of this subject in the metropolitan area of Guadalajara. Students also formulate a survey to generate and disseminate information on this issue. 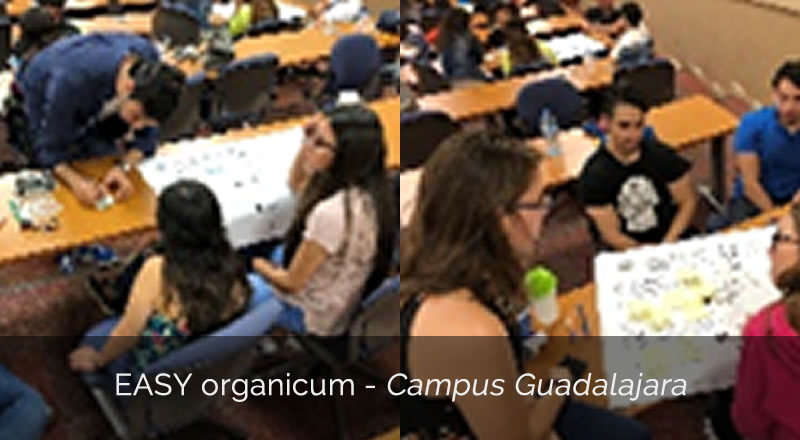 Location: TEC de Monterrey Campus Guadalajara (1 day) and Urban Forest of EXTRA A.C./ Zapopan, Jalisco (4 days)
This Week i is designed so that students will come to understand global environmental issues regarding the excessive production of plastic containers and other waste materials, apart from developing and informing society of viable solutions.

This Week i is designed so that students will come to understand global environmental issues regarding the excessive production of plastic containers and other waste materials, apart from developing and informing society of viable solutions.

Transformation of trash into plant pots for organic horticulture.
Creation of a video to demonstrate the transformation process.
Setting up the showroom to exhibit these waste management opportunities.
Information and investigation to implement a green culture.
Specific environmental culture training.

The achievements obtained include : 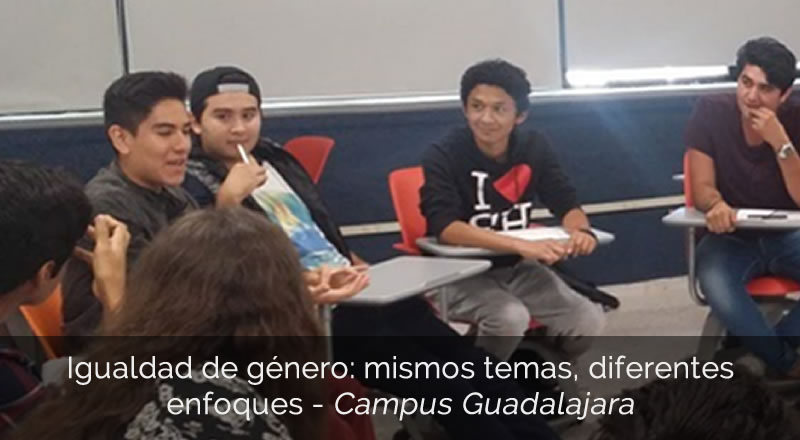 To generate a quality media product that could be of use to the education partner and that reflects the ideals and objectives of the association, as well as its mission of generating environments that foment empowerment, autonomy and a violence-free life for women.

The participants enjoyed a week of reflection on gender equality based on different perspectives and approaches. The objective was for the students to recognize this issue in their own reality and context.

The education partner was the nonprofit organization Construyendo Redes de Bienestar para la Mujer y su Familia (Building Wellbeing Networks for Women and their Families), which focuses on generating environments that foment empowerment, autonomy and a violence-free life for women.

At the end of the week, students delivered five media-related products to the Education Partner Organization, which are currently being implemented on its social networks and with its users. 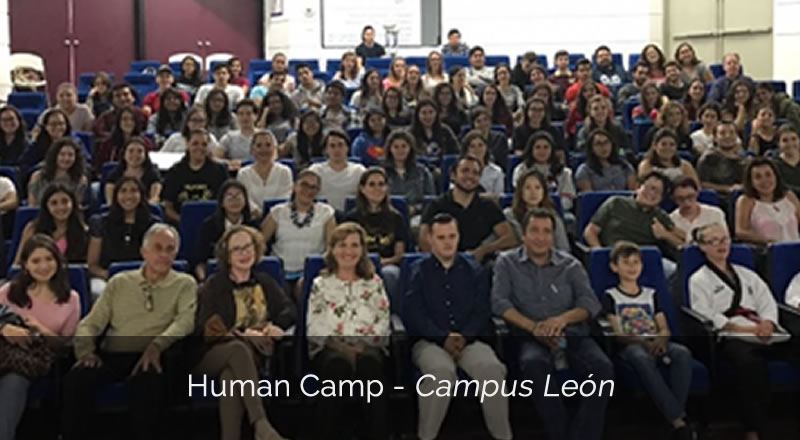 To become aware of topics related to children with disabilities and to reflect on how to include them in education stages to achieve social and work inclusion.

The student learning experience was divided into three major stages: 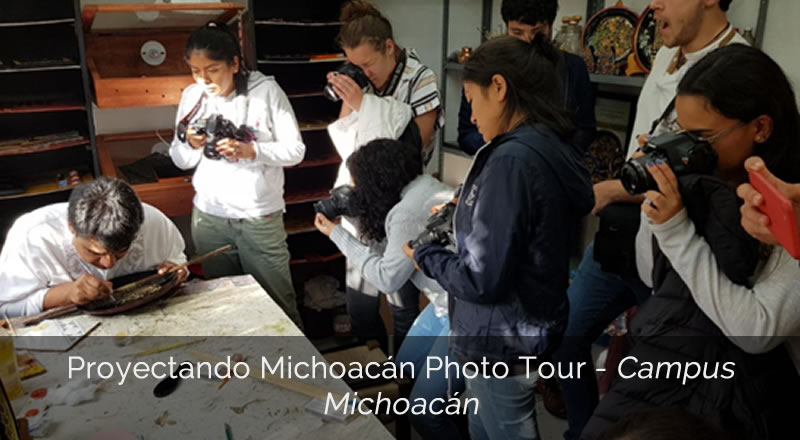 This Week i activity forms part of an awareness project about Michoacán culture. The objective is to foster reflection on this state’s resources and contribute to its promotion, while driving the region’s economic development. The activity took place in Morelia, Capula, Santa Fe de la Laguna, Ihuatzio and Pátzcuaro. The students’ work helps the community to recognize, value and appreciate the artwork of the region’s artisans.
Challenge
To develop creativity and visual skills using the camera as a means of expression, learning about basic visual composition to create a photography series that reflects the traditional clothing, architecture, daily life, festivals and rites of Michoacán.
The challenge is a theoretical-practical activity to learn about the functioning of a digital reflex camera in manual mode and also to document popular culture and art by means of a photographic tour of the villages in the Riviera del Lago de Pátzcuaro region in Michoacán, with the aim of disseminating and promoting their traditions.

Students developed creativity competencies and visual skills using the camera as a means of expression and learning the basics of visual composition. They visited the Capula, Santa Fe de la Laguna, Ihuatzio and Pátzcuaro communities, photographically documenting the work of the region’s artisans, conducting interviews, learning how arts and crafts are made, and becoming aware of their cultural and economic importance. The students’ photographic work was exhibited together with another Week i activity, which consisted of a comprehensive concert of traditional Michoacán music, held in the historical center of the state capital, Morelia.

The participating students developed creativity competencies and visual skills, and used them to contribute to the awareness and promotion of the cultural importance and wealth of Michoacán, thereby driving the region’s economic development.

The students handed in photograph dossiers and essays, which displayed the competencies of empathy and social commitment they had developed, responding constructively, fairly and with solidarity to outside circumstances.

The beneficiaries were the students themselves, the Michoacán artisans and the community who viewed the photograph exhibition held within the framework of a comprehensive concert in the historical center of Morelia, the audiences who will be able to view the students’ work on digital media, and the people who will benefit from the economic development that results from the promotion of Michoacán art. 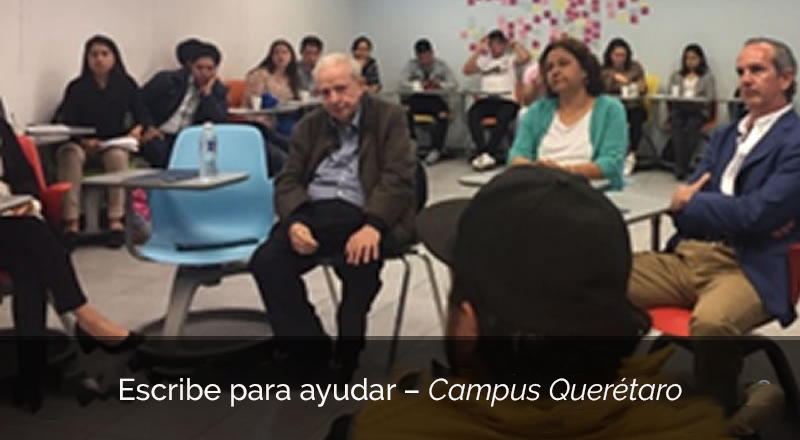 To write a creative socio-promotional text in two languages (Spanish and English) that could be used by the children’s home group, Hogares Providencia, to attract more donors and funds in Mexico and abroad.

The texts written by the students surpassed all expectations, given that they completed an observation process and interacted with the children during their normal morning routine, enabling them to study all the rituals, habits, forms, etc. that occur in Hogares Providencia on a typical day and then write an article.
The students interviewed people who had graduated from Hogares Providencia to gather their testimonies of how this institution had had a positive effect on their lives and then expressed in their texts the human and social importance of the homes’ work. Afterwards, they produced and presented the texts to the members of the Hogares Providencia Trust and some of their most important sponsors. 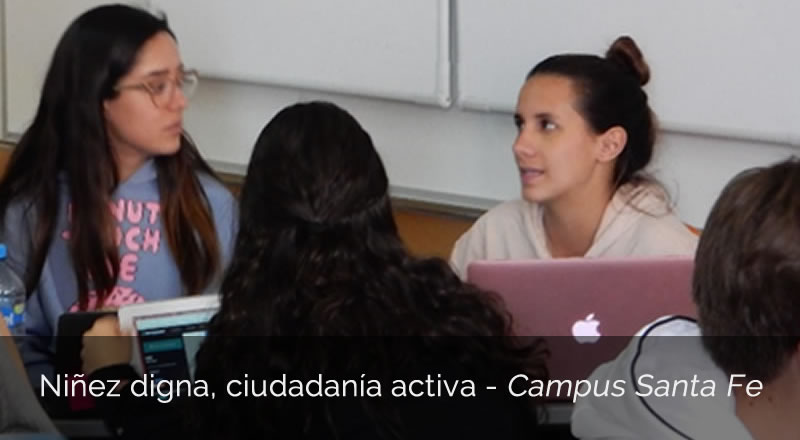 To develop dissemination prototypes (products) for the problems, preventions and solutions identified in diverse topics related to children in Mexico.

“Decent Childhood, Active Citizens” is a Slow U Challenge. Students worked with this methodology for the first two days of the week. The students split up into nine teams of four to develop the dissemination prototypes (products).

The education partner, the UN Information Center Mexico, participated during the student awareness stage. The center contributed decisively in revealing a reality that the students had been shown before starting the challenge, but that was distant, since they didn’t know anyone who had personally experienced a situation in which a child’s rights had been violated.

As a result, the students felt indignation, impotence, astonishment and realization of the reality of children in the country, the city and close to home, in their own environment. This motivated the group to identify specific issues in the diverse realities of children and orientate the prototyping process towards them.

Once each team had identified its objective, they defined their target audiences in order to generate blogs, posters, activations on Instagram and social networks to disseminate the prevention and solution of the difficulties identified, which were presented to the education partner on the last day. The education partner was pleased with the results of several of the projects and with the students’ interest and commitment, acknowledging the short amount of time available to develop the prototype.

An internal survey on the challenge was conducted to determine students’ perception, with the participation of 82% of the group. 100% of participants reported having acquired new knowledge.
42% commented that the challenge had made them more aware of the issues related to children in Mexico.
100% said that “Decent Childhood, Active Citizens” changed their way of thinking regarding the day-to-day reality of children. 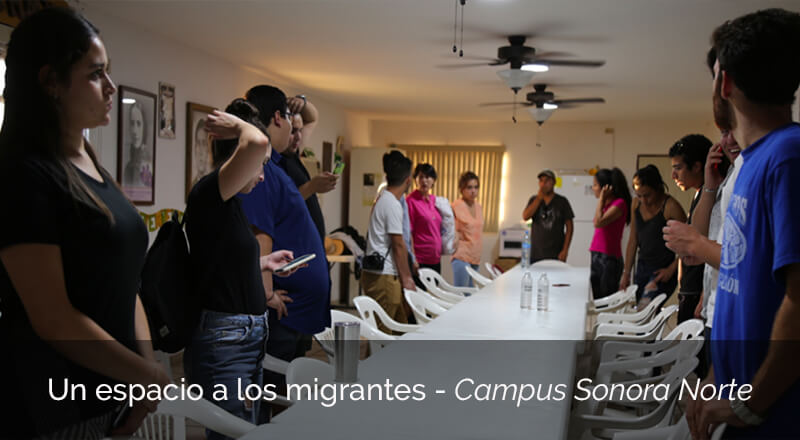 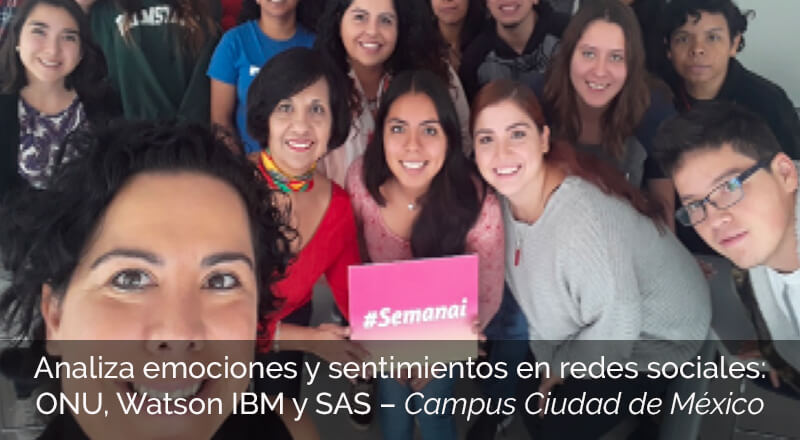