Play like a champion: Terrell Owens shares his path to success

In a fireside chat with Juan Pablo Murra, Rector of Undergraduate and Graduate Studies at the Tec, Terrell Owens shares the lessons he has learned from his career at INCmty.

“I didn’t know that I was going to become a professional player. As a kid, I wanted to do my best to be relevant and I saw that other kids were much better than me, so I knew I had to work a lot harder to achieve it.”

This was one of the memories that former NFL player Terrell Owens shared during his talk with Juan Pablo Murra, Rector of Undergraduate and Graduate Studies at Tec de Monterrey, at  INCmty 2020.

The former wide receiver for teams like the Dallas Cowboys and the San Francisco 49ers, spoke about his humble origins in Alexander City, Alabama, where his mother and grandmother raised him and his three brothers.

“I was like any other kid growing up in the 80s and 90s who loved basketball, it was my passion. I love that sport and my favorite players were Michael Jordan and Kobe Bryant; I wanted to be like Jordan,” he said. 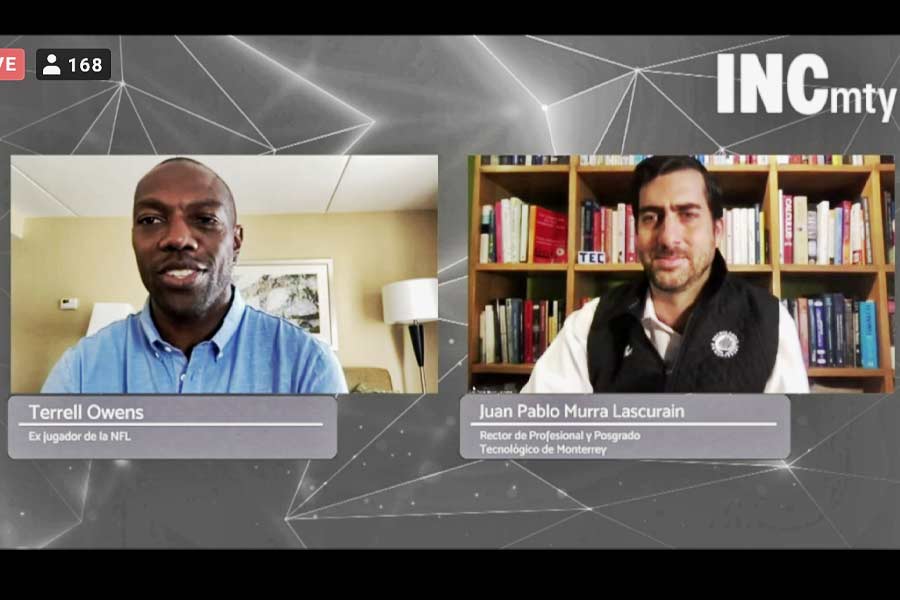 The former player said that when he was in college, supporting his family was a great motivation to excel.

“I was not one of those kids who had luxuries like cars and brand name clothes and shoes. I had to get financial aid through the school system to have money.

“These are the factors that motivated me, as well as understanding that my mother made a great sacrifice for me,” he said.

His passion for sports led him to practice basketball, track and field, baseball, and football, the latter which he focused on until entering the NFL Hall of Fame.

The keys to Terrell Owens’ success

Owens shared that one of the keys to his success has been the support given to him by his family, teachers, and coaches; they are his notion of a team and they have helped him from the beginning to unleash his potential.

He spoke of the motivation that comes from his mother, and also recalled that Larry Kirksey, a coach he had in San Francisco, helped him develop his skills by utilizing his passion for basketball.

“He knew I liked basketball and he used that to bring out the best in me. In a move, he told me: ‘this is as if you were playing one on one and you are trying to score; you have to go beyond him to reach the basket.’ When he told me that, everything fell into place for me,” Owens said.

Owens added that perseverance was one of the values that characterized him from a very young age. For example, he worked on his body so he could be ready for when an opportunity presented itself.

“During the summer at university, I asked for the key to the gym. I had it 24 hours a day; my physique is something I have worked on; it was a long process that didn’t happen overnight.

“You may not see the results you want right away, but when you are given the opportunity you’ve been waiting for and longing for, then you will be ready to take it.”

He even shared that as a father, one of the lessons he gives his children is to instill in them a “dissatisfaction with mediocrity.”

“You have to be constant, there must also be the belief that you are going to be good, and then that you are worthy of being not only good but great. However, there is no magic pill to improve or be great,” he added.

The 3 Ds of success

Although he just missed out on winning a Super Bowl, Owens is aware of the magnitude of his career and his accomplishments in his fifteen years as a professional NFL player.

He said that he devised a formula to achieve his goals, which he called the 3 Ds.

“This was the knowledge that I acquired while playing football. These are the 3 Ds that anyone can apply, not just athletes but everyone, for whatever aspirations may have,” he commented.

“I always had that desire to stand out, no matter what it was; I could have been a basketball, golf or tennis player. Fortunately for me, I had that competitiveness for sports and luckily I had the desire to be the best receiver.”

“When I was in school and university, and also when I was working with professionals, I had to dedicate myself to my training.”

“Discipline is probably the most important of all as it is the bridge that separates our goals from success.

He said you also need to enjoy what you do, because if you don’t find joy and happiness in what you do, it will just seem like work and it will not be so exciting to get up in the morning to do it.

“I had to find joy and really want to improve. There were times when I had weaknesses and areas of opportunity in my game, but I focused on trying to improve in those areas and when you find joy, you want to deliver results,” he said.

Just as the former NFL player highlighted the importance of the 3-D formula in his life to achieve success, he also said that you have to learn from defeats.

“Defeats are part of what you learn in life and just as you have to prepare to win, you also have to learn to lose. This applies to anything you do in life.

“Another thing, it’s okay to be scared. I use it as a driving force; fear will make you accept the challenge if you are prepared,” he reflected.

Owens also said that whatever you do, do it without paying heed to the opinions of outsiders.

“People are going to talk about you one way or another, but at the end of the day, for example, I think that everything I did on the football field spoke for me.

“Don’t expect to become a champion over the years, play like one from now on!”

“Don’t expect to become a champion over the years, play like one from now on!”

There are obstacles, adversities and hard times that will come out of nowhere, he added, but it is how you respond to those circumstances that will make you stronger.

“Put it in your rearview mirror, deal with it, process it and continue. It’s difficult, but that is both the beautiful and difficult thing about life; we are all going to go through something that will be a challenge and if you have a good support system, you will be able to hold your head up and smile.“

He gave the COVID-19 pandemic as an example of adversity which has affected people in different ways.

“There are people who have lost their jobs and it has had a direct impact on single-parent families with children. This difficult situation has given people the opportunity to find other ways to develop and survive.

“It’s probably why a lot of people are re-evaluating where they are in life in order to survive and keep moving forwards,” he added.

Finally, he mentioned that the United States presidential election is historic because it has taken place in the midst of important movements in favor of human rights and at a time as challenging as the pandemic.

At the end of the talk, Juan Pablo Murra acknowledged that Owens’ words were inspiring and urged entrepreneurs to follow his path to success, as there are clear signs that dreams can be achieved by receiving motivation from those who are at the top.

Who is Terrell Owens?

Throughout his 15-year career in the NFL, Terrell Owens gained a record of 1078 catches, 15,934 yards and 153 touchdowns, for which he himself has been classified as an “explosive receiver.”

In 2006, he played for the Dallas Cowboys, where he set a record of 15 touchdown catches.

In his career, he has achieved various accolades, including 6 Pro Bowl appearances, five times “All-Pro” from the Associated Press and five seasons with 13 or more touchdowns.

He is an activist for vulnerable groups, mainly children.

Owens is an entrepreneur and has also established himself as a best-selling author with books like “Little T Learns To Share.” 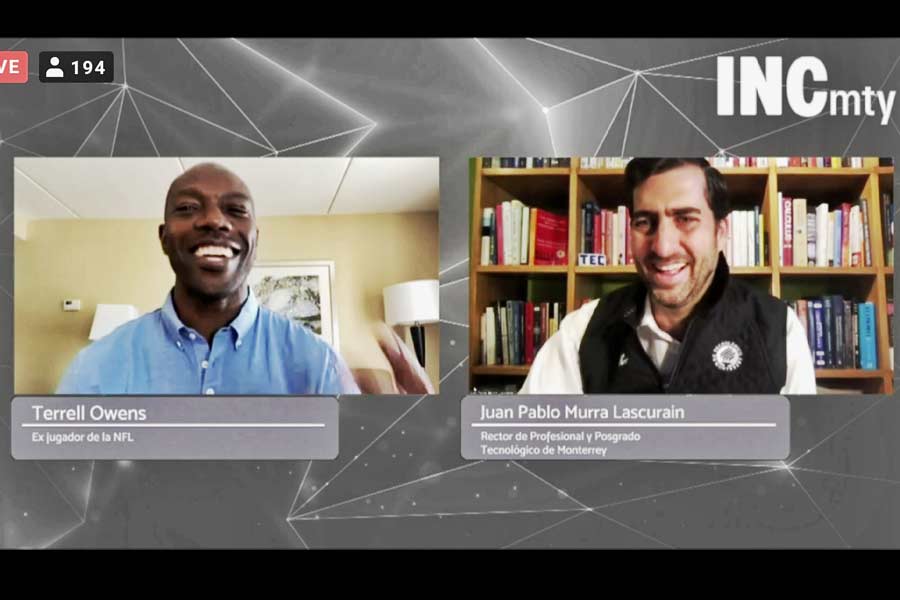 INCmty is the most prestigious and influential entrepreneurship festival in Latin America and is organized by the Tec de Monterrey. It will take place from November 2 to 6 and for the first time will be 100% virtual.

David Garza, President and Executive President of the Tecnológico de Monterrey, reiterated the Institution’s commitment, using the three Is: Investigation, Innovation and Internationalization to consolidate itself as a center of education, despite the challenges that have been presented due to the current situation.

“During these times, it is vital to keep in mind that challenging moments create great opportunities for entrepreneurship. The Tec renews its commitment to entrepreneurship, which is part of its DNA,” said Garza.

Dallas Cowboys quarterback is “fan” of Tec alumnus in the NFL