A Tec student has received one of the three global awards from the International Society for Biofabrication for a bioprinting project to aid with muscle regeneration.
By Ricardo Treviño | CONECTA National News Desk - 09/10/2021 Photo Hecson Olguín

A Ph.D. student at Tec de Monterrey has been recognized with a global award for her project on bioprinting pre-vascularized tissues, which would aid with muscle regeneration.

Johana Bolívar, a Ph.D. student in Biotechnology at the Monterrey campus, was recognized by the International Society for Biofabrication (ISBF).

The ISBF Young Scientist Award is presented each year to only three doctoral students worldwide for their outstanding achievements in an innovative project.

“It’s an honor to receive this award as a representative of Latin America. It’s the result of a great effort on my part and by my colleagues, who are also part of this project, as well as my advisors,” said the 31-year-old student. 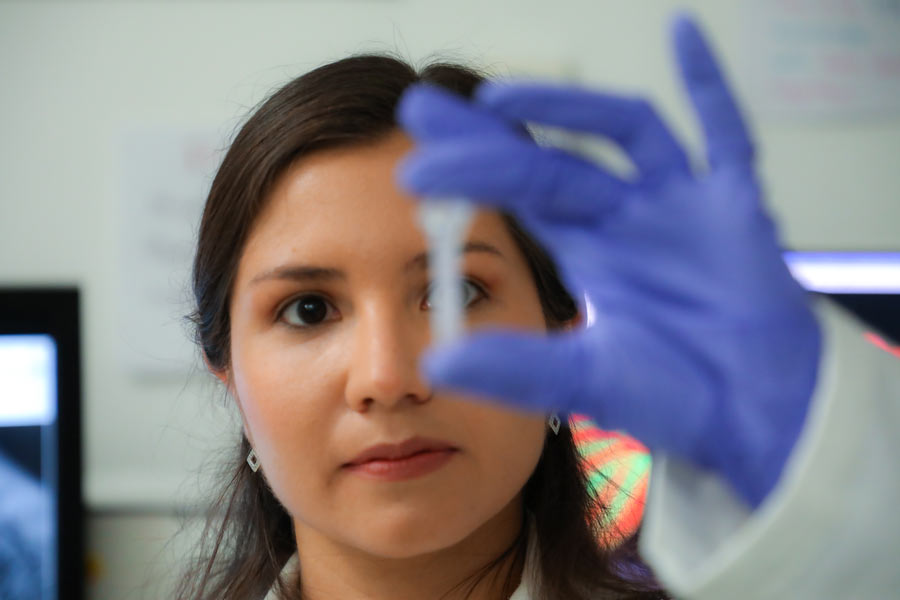 The student explained to CONECTA that the materials making up the filament are loaded with cells such as muscle cells, which develop into muscle tissue.

In addition, the empty channels promote faster cell development, facilitating the circulation of oxygen and nutrients, similar to the function of blood vessels in the human body.

“The idea of incorporating these channels into vascular cells is that our muscle fibers are surrounded by spaces because they are thick tissues and they need these blood vessels to be oxygenated and nourished.

“We’re all prone to suffering from musculoskeletal conditions. For example, you can get hurt playing soccer or in a car accident. Our aim is to generate these filaments so that in the future they can be implanted and help regenerate muscle tissue,” she said.

“Our aim is to generate these filaments so that in the future they can be implanted and help regenerate muscle tissue.” 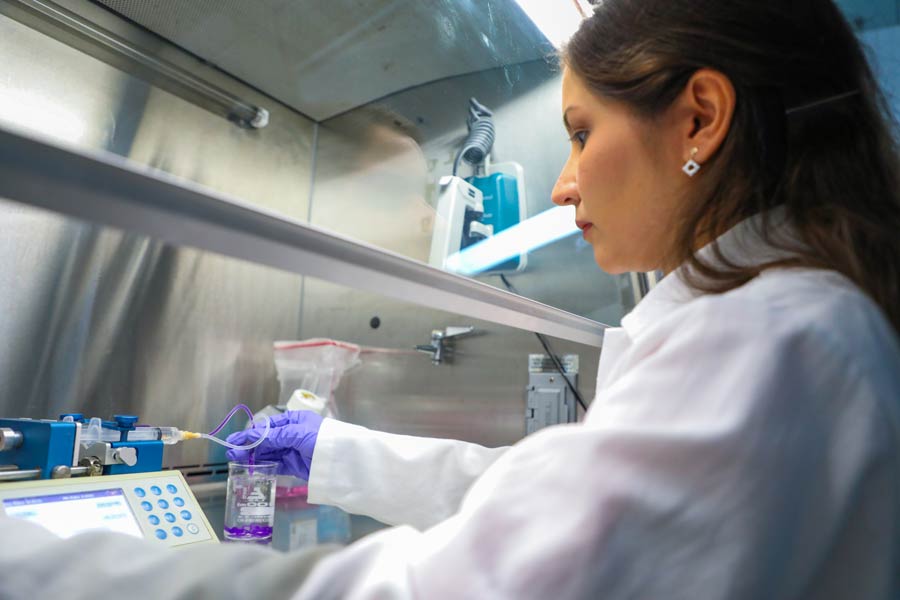 Johana, who hails from Cali, Colombia, holds bachelor’s and master’s degrees in Food Engineering from Universidad del Valle in her country.

Her interest in generating human wellbeing and working on something related to human health led her to study for a doctorate at the Tec.

“I used to focus on fermented products to improve nutrition and now I can work on something more biomedical, developing tissues through bioprinting techniques, which is also focused on improving people’s quality of life,” she said.

Currently, the young researcher is developing her project at the Alvarez-Trujillo Lab, located at the FEMSA Biotechnology Center on the Tec’s Monterrey campus.

There, she’s advised by Dr. Grissel Trujillo from the Tec’s School of Engineering and Sciences, who runs the laboratory together with her husband Dr. Mario Álvarez and a team focused on researching the use of biomaterials and chaotic 3D bioprinting technologies.

“Working with Dr. Grissel has been great. She’s a very good advisor, she’s always attentive to our wellbeing, and we meet very often to review the progress and objectives of the research,” said the student.

“It’s highly satisfying for our research group that the quality of the work we do in the laboratory has been recognized.” - Grissel Trujillo

Finding a family at the lab

Johana also shares the laboratory with her husband Carlos Ceballos, who has not only been her lab partner but has collaborated with her on her projects, including the one that she received the award for.

“My husband and I have been fortunate to work together since we were in Colombia. He’s a very good co-worker, friend, and husband.

“We’ve been on the team for three years and it’s been wonderful to work with my teammates. I think of them as my brothers and sisters. It’s a multidisciplinary team, with colleagues who’ve studied different degrees, all contributing to the research from different areas,” said Johana.

Dr. Grissel highlighted that this recognition isn’t only an important achievement in Johana’s career, but also for the laboratory team and for Tec de Monterrey, as well as for the research carried out in Mexico and Latin America.

“Johana is an exemplary Ph.D. student. This is a reward for her discipline and her hours of work. This will greatly strengthen her profile because this award is given by people who are world authorities in the areas of biofabrication and bioprinting.

“It’s highly satisfying for our research group that the quality of the work we do in the laboratory has been recognized.” And for the Tec, as a Latin American institution, it’s an indicator that the research efforts are paying off,” said the doctor. 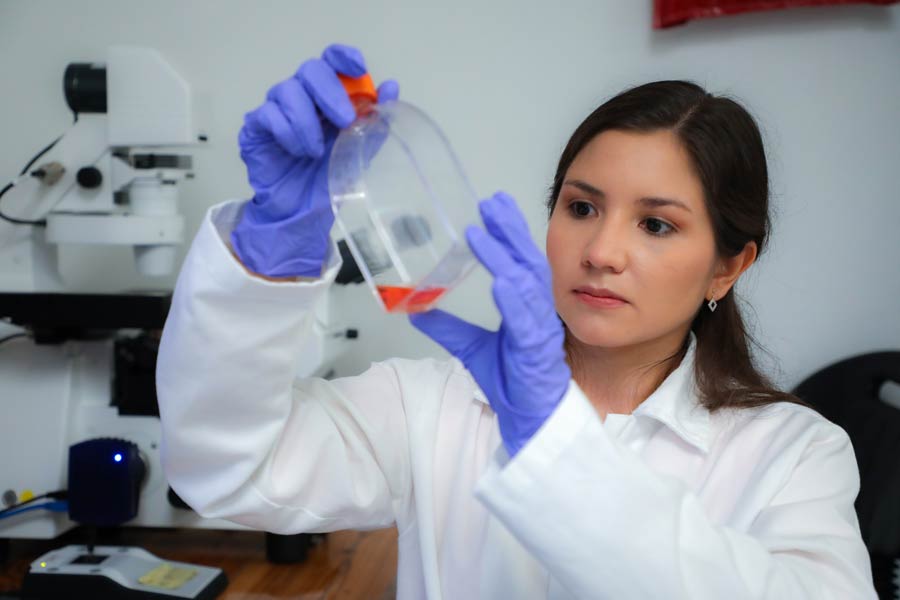 An award for research in Latin America

The award presented by the International Society for Biofabrication is the ‘ISBF Young Scientist Award - Biofabrication 2021.’ There are three awards around the world in that category: one for the Americas, one for Europe/Africa, and the remainder for Asia/Oceania.

The ISBF is made up of scientists and professionals who promote advances in research, development, education, and the development of medical and clinical applications of biofabrication.

“It’s a very prestigious worldwide institution that covers the most important research in the biofabrication area. For me, it’s a great source of pride to be able to receive an award from them”, Johana said.

Her doctoral thesis project won the student this year’s award for the Americas.

“In the Americas, we’re competing with highly established laboratories and research groups in the United States and Canada, and it was won by Mexico, Tec de Monterrey, and Johana. That’s why it’s very important,” said Dr. Grissel.

The award ceremony will be held virtually due to the pandemic during the 2021 International Biofabrication Conference in Australia, on September 27. There, Johana will present her research project to those attending the event.

“We’re competing with highly established laboratories and research groups in the United States and Canada, and it was won by Mexico, Tec de Monterrey, and Johana. That’s why it’s very important.” - Dr. Grissel Trujillo