The number of Tec de Monterrey professors in the National Research System (SNI) has doubled in the past ten years.
By Michael Ramírez - 01/27/2019

This year, Tecnológico de Monterrey recorded 570 research professors who are registered in the Mexican National Research System (SNI), which is an increase of 124 percent over the number from 10 years ago.

The SNI is a distinction awarded by the National Science and Technology Council (CONACyT) to support talent working towards scientific development and consolidation. Appointments are divided into different levels: Candidate, Level 1, Level 2, and Level 3.

Historically, the number of professors registered in the SNI in recent years has been as follows: 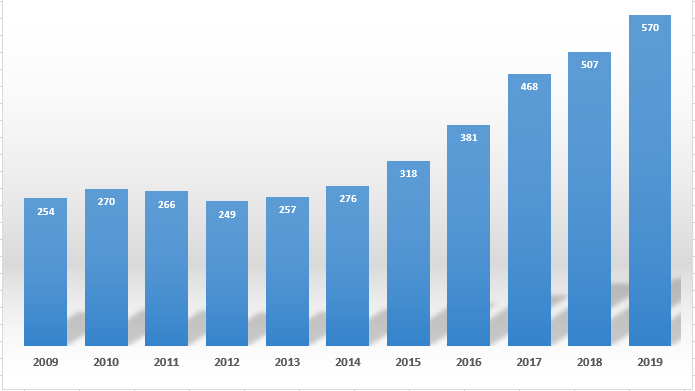 This recognition is granted through peer review and consists of awarding an appointment to national researcher status. The SNI includes all scientific and technological disciplines practiced in the country.

For Arturo Molina, Tecnológico de Monterrey Vice Rector of Research and Technology Transfer, this fact shows consolidation of the Research that Transforms Lives strategy from the 2020 Plan, one of whose goals was to have 500 Tec research professors recognized by the Mexican National Research System.

“Tec researchers have established themselves at national level by collaborating with institutions such as UNAM, IPN, UAM, UANL and Tecnológico de Monterrey. My congratulations to all the new members of the SNI and those who have progressed to other levels within that organization, which reflects the quality of research they carry out,” he said.

“It’s important to note that both postgraduate and undergraduate students take part in Tec de Monterrey research. 7,066 students took part in 2018, of whom 4,616 were at undergraduate level,” he added.

For David Garza Salazar, Rector of Tecnológico de Monterrey, this achievement is the result of the effort and discipline of the Institution’s researchers, who have generated a total of almost 500 patent applications, published 9,319 scientific articles, and received 71,890 citations.

“What’s more, we’ve graduated more than 1,500 PhD students in 75 years; and the quality of research guided by our professors has allowed us to establish strategic research partnerships with more than 15 of the top 200 universities in the world,” he said.

“I’m grateful to all of them, as they’ve made a great contribution to science in Mexico through their efforts, a result of the Research that Transforms Lives institutional strategy,” said Garza Salazar.

He went on to say, “I invite them to join us in redoubling our efforts to perform research with the greatest impact on society, which quickly generates solutions to problems in our country and the world.”

The 49th Research and Development Conference will begin on January 29, which will be held until Friday at the Monterrey campus Conference Center.

This Research Conference is a meeting ground for sharing and giving greater visibility to those Tec de Monterrey research topics that are generating innovation and development in the world.

More than 30 activities will be carried out, including workshops, lectures, parallel sessions with research groups, networking opportunities, and the presentation of high school, bachelor’s, master’s, and PhD research projects.

Moreover, there will be certain important events on Wednesday the 30th, such as the award of the Rómulo Garza Research and Innovation Prize to Tec researchers with significant careers in developing science and technology in Mexico, as well as to students taking part in research projects.

The “Tec Projects that are Transforming Mexico” will also be presented on the same day. These are scientific developments that have demonstrated their impact on areas such as health sciences, molecular nutrition, architecture, and sustainable technologies.

There will also be two keynote speeches. The first will be given by Enrique Graue, Rector of the National Autonomous University of Mexico (UNAM) and the second by Bertil Andersson, board member of the Nobel Foundation and President Emeritus of Nanyang Technological University (NTU Singapore).

The full program of the 49th Research and Development Conference can be consulted here.

Due to an error, an earlier version of this article stated that the percentage of growth in the number of SNI researchers was 224%. The correct figure is 124%.