Tec de Monterrey, together with the British Embassy in Mexico, the World Wildlife Fund (WWF), and like-minded organizations, participated in the call for Latin American leaders to join the Race to Zero (RtZ) initiative.

This global initiative, which the Tec is participating in, seeks partnerships between state and municipal governments, the private sector, and universities to achieve the 2050 climate goal to limit global warming.

“Universities are very important, and we need to do what’s right: act decisively to achieve carbon neutrality with the necessary speed,” said Inés Sáenz, Vice President for Inclusion, Social Impact, and Sustainability at the Tec.

Sáenz participated in the virtual talk Alliances for Climate Action Race to Zero Accelerator: Steps for Universities to Follow this past October 1.

The call comes ahead of the 2021 United Nations Climate Change Conference (COP26), which will be held from November 1 to 12 in Glasgow, Scotland.

The Tec’s actions to tackle the climate emergency

In the talk, Sáenz explained that the Tec considers this issue a climate emergency as it has public health, security, social, environmental, and political implications.

“We recognize that we need rapid, profound, far-reaching, and unprecedented changes at every level of society to address the climate crisis,” she said.

Sáenz said the Tec underlines the importance of collaborating with other universities and society as a whole to take rigorous and immediate action to cut global emissions in half by 2030.

“That’s why we’re sharing our 2025 Sustainability and Climate Change Plan, in which we commit to achieving carbon neutrality on our campuses by 2040,” she added.

“Universities are very important. We need to do what’s right: act forcefully to achieve carbon neutrality with the necessary speed.” - Inés Sáenz

The Tec’s 6 actions contained in this plan were announced on April 22, said Sáenz:

United against climate change in this initiative

The RtZ signatories commit to establishing a Climate Action Plan with clear science-based objectives, to immediately showing local climate action, and to reporting progress at least once a year.

“We need to lead the transformational actions. It’s not just about small changes, but also about really decoupling our economic growth from carbon emissions,” said Jorge Rickards, Director of WWF Mexico.

“We call on heads of government to publicly commit their cities to setting ambitious science-based targets to reduce their emissions and join Race to Zero,” said Jon Benjamin, British Ambassador to Mexico.

This initiative is backed by the United Nations (UN) and was launched in June 2018 by Gonzalo Muñoz and Nigel Topping, appointed high-level climate action champions.

The role of climate action champions, designated annually at the Conferences of the Parties (COP), is to seek collaboration between governments, businesses, and other actors to take action against climate change.

Nigel Topping, for his part, mentioned the urgency of “universities also participating with their curricular programs to create awareness in future leaders.” 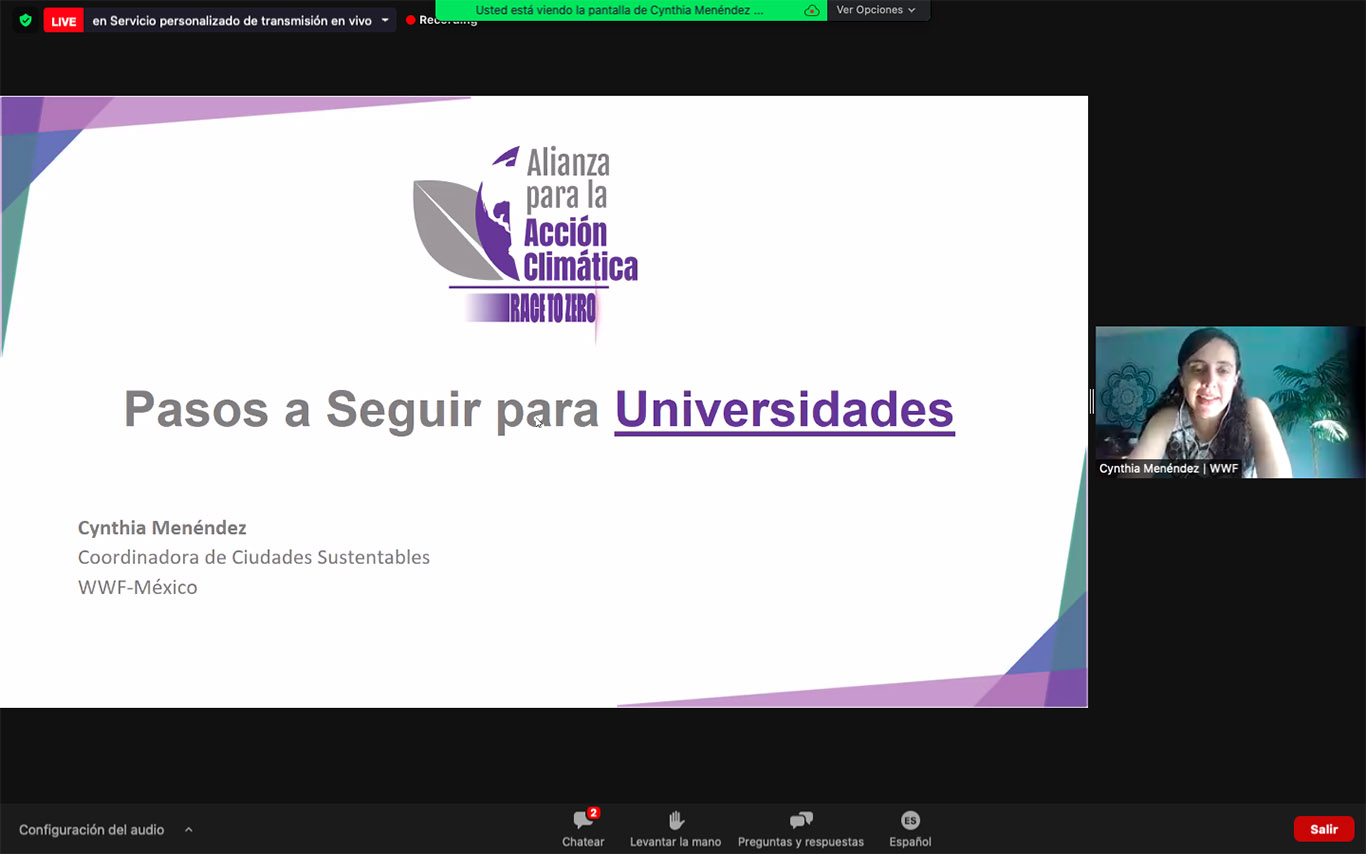 Change through Alliances for Climate Action

Less than 15% of RtZ members are from Latin America; therefore, it is necessary to increase climate ambition in this region, the panelists agreed.

Cynthia Menéndez, Coordinator of Sustainable Cities for WWF Mexico, spoke of the search to implement systemic change through the Alliances for Climate Action (ACAs).

“We all want to get tens in this context, but this time what we want is for all of us to get zeros,” she said.

The ACAs are a method that consists of three strategies to accelerate the realization of climate goals:

If you want to know more about the campaign, you can find information on the World Wildlife Fund page.

The Tec seeks to contribute in this call to the Nationally Determined Contribution by Mexico in the Paris Agreement, establishing goals of carbon neutrality and climate resilience with the Race to Zero and Race to Resilience campaigns.

The institution has signed several international commitments in recent years, in search of efforts to advance toward sustainability and against climate change.

In June of this year, the Tec, together with 45 leading universities in the world, committed to continue implementing programs and actions in favor of sustainability, which they stipulated when signing the Hamburg Declaration 2021, released at the Global University Leaders Council Hamburg 2021 (GUC Hamburg).

What’s more, in December 2019, the Tec signed the Global Climate Letter for Universities and Colleges, in which one of the commitments was to achieve carbon neutrality by 2040.

RtZ is the world’s largest campaign that currently brings together: