Sisodia joined as the Distinguished University Professor of Conscious Enterprise at the CEC, which is part of the EGADE Business School and the Tec’s Business School.

The Tec launched the CEC as part of its vision for 2030 and its 2025 strategic plan to develop a new awareness in leaders, companies, and organizations that contributes to human development, with Sisodia at the core of this initiative.

During the inaugural event, Sisodia gave the keynote presentation entitled “Towards Conscious Capitalism”, in which he explained that the nature of the CEC is to provide guidance and mutual learning opportunities.

“Tecnológico de Monterrey has the capacity and the opportunity to transform the nature of business in Mexico, Latin America, and beyond,” said Sisodia.

“Tecnológico de Monterrey has the capacity and the opportunity to transform the nature of business in Mexico, Latin America, and beyond.” - Raj Sisodia. 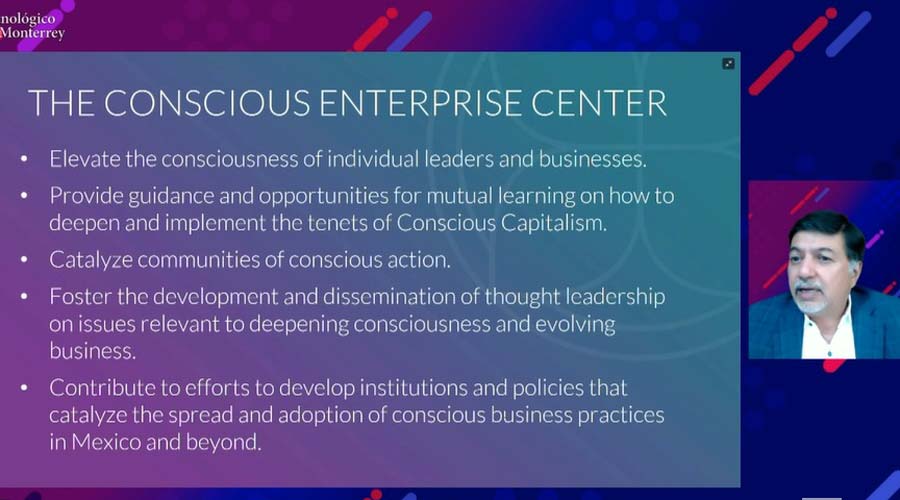 Conscious capitalism so that everyone wins

Sisodia said he was excited about coming to a university like the Tec, as well as about the opportunity the CEC’s launch brings.

“Conscious capitalism offers dynamism with decency. It works for everyone. Everyone matters and everyone wins. I want to invite everyone on this adventure with us.”

Ignacio de la Vega, Vice Rector for Academic Affairs, Faculty, and Internationalization at the Tec, said that Raj Sisodia has been a full-time professor at the institution since September 1.

“Raj has become the Tec’s first Distinguished Professor, as part of an initiative by the institution to attract 100 global leaders in their fields of study in the years to come,” said De la Vega.

The axes of the Conscious Enterprise Center

This center, which will have Francisco Fernández as executive director, and Christiane Molina as academic and research director, will be working based on four axes:

Based on applied research, for the implementation of the conscious management model.

One project along these lines is that of a “Living Wage Calculator”. The first book on conscious capitalism in Mexico is also being prepared.

It seeks to reinforce this network of relationships by promoting the Tec de Monterrey philosophy and platform.

Currently, the CEC is building relationships with the Conscious Capitalism Mexico Chapter, System B, Alliance for Impact Investment, Social Capitalism Initiative, PRME, and Global Compact, and will continue to add more strategic allies.

Knowledge to develop the mindset, which translates into actions and impact.

To this end, more than 900 students nationwide have taken the Conscious Leadership in Business course.

Teachers who drive leadership and mindful culture. Along these lines, the first generation of 30 teachers specializing in Conscious Enterprises have been trained.

The Tec has research groups with a strategic focus aligned with the center’s themes, including the Research Group on Social Innovation and Sustainability and the group of experts on “Sustainable Wealth Creation”. 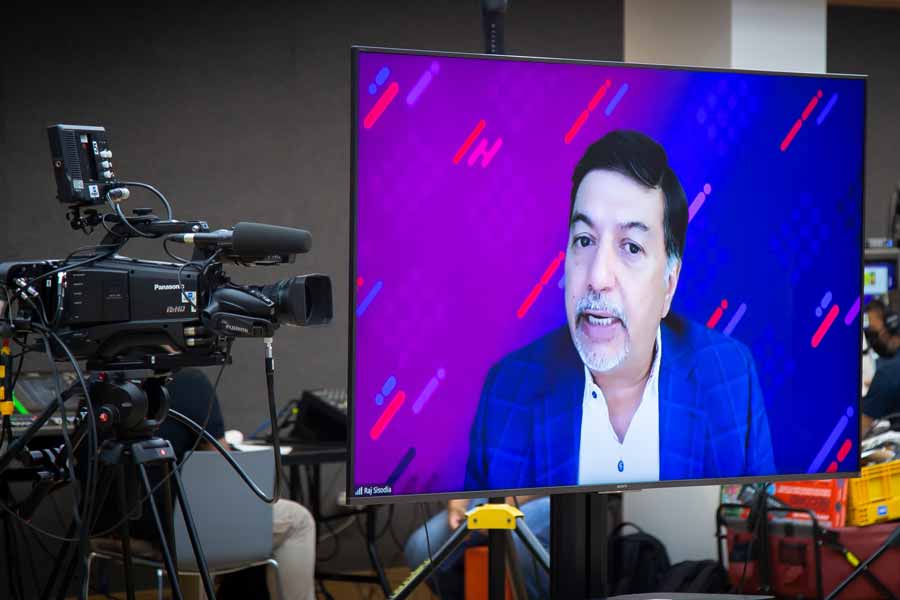 Projects that seek to have an impact on society

Dr. Molina said that the Center will promote a series of projects and initiatives to achieve a significant impact and renew the current development model in order to build more prosperous, fairer, and more inclusive societies.

She said that the center is currently designing its first concentration in conscious business and is in the process of designing educational training programs.

The CEC promotes the principles of conscious capitalism, enriching and adapting them to a Mexican and Latin American context.

“The Center is an effort that joins a worldwide movement. We seek to play a role in accelerating and amplifying the impact on even more organizations and people in Mexico and Latin America,” said Fernández.

“With the CEC, the Tec reaffirms that it’s a very effective platform, a medium of society for society that seeks to positively impact the lives of millions of people,” added the CEC’s director.

“We’ll carry out different activities to change, for the better, the most important leaders of each Latin American organization and company,” added Molina. 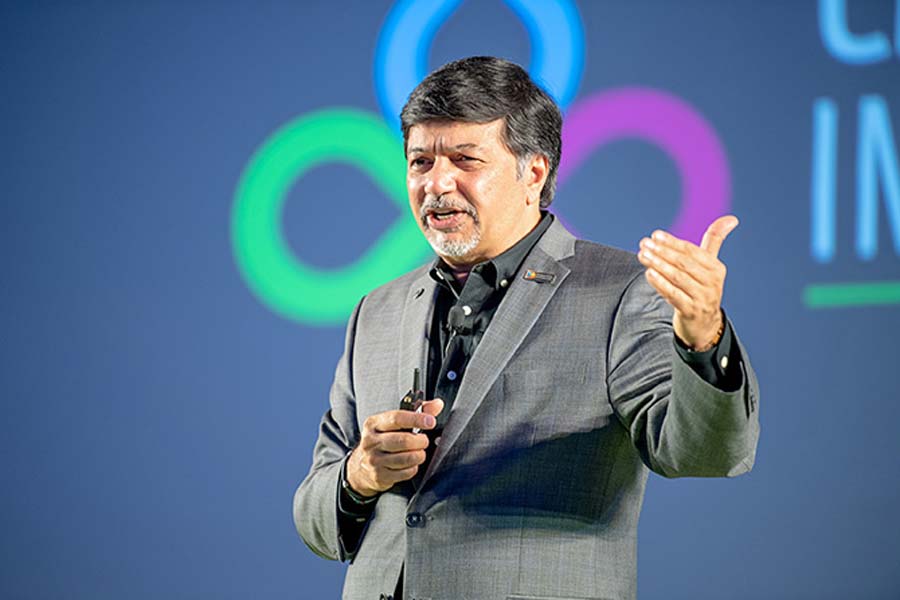 Sisodia is the Co-Founder of Conscious Capitalism, a non-profit organization present in 12 countries, which disseminates a more human capitalism and the sustainable transformation of the economy.

“Raj will be the motivational part of this team. He’s here to enrich the foundation of this center with his expertise and will advise us on all strategic plans,” said Molina.

For the Tec, having Raj as a collaborator means adding extraordinary talent that looks to bring this vision of new awareness into being, she added.

“Raj and the Tec have the same mission and the same vision. With Raj’s involvement and the institution’s support, this initiative will be much more tangible,” said Molina.

David Garza, Rector and Executive President at the Tec, and Juan Pablo Murra, Rector for Undergraduate and Graduate Studies, welcomed guests at the CEC’s inaugural ceremony, which was transmitted via social media.

“With the CEC, the Tec reaffirms that it’s a very effective platform (...) that seeks to positively impact the lives of millions of people” .- Francisco Fernández. 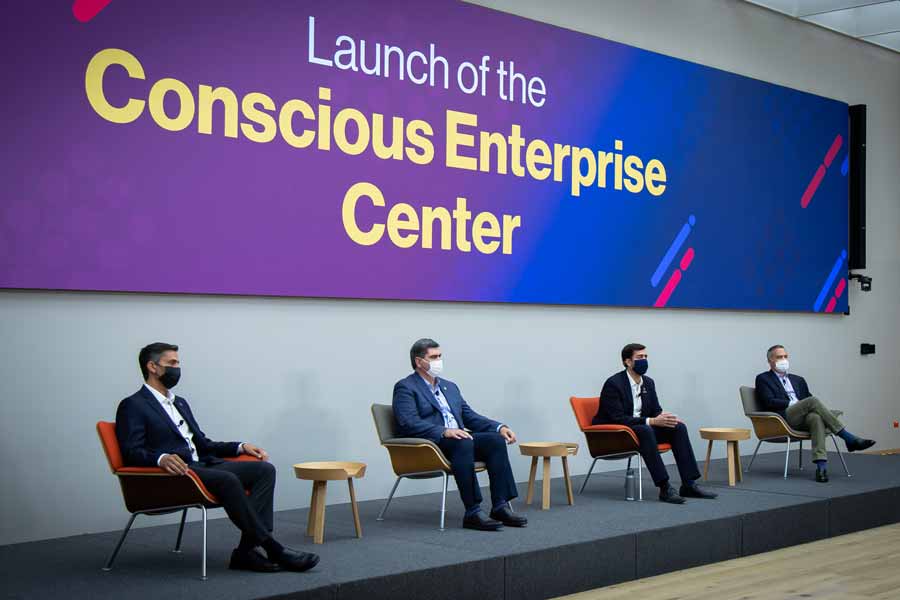 Collaboration between the Tec and Sisodia

Ever since he first became involved in the Mexican university, Raj has been a “cornerstone” in designing the Conscious Enterprise Center, Molina said.

Sisodia began collaborating with the Tec in 2018 as a Distinguished Visiting Professor at the Business School.

He taught the Conscious Leadership in Business course, where he trained 30 professors, who will now take part in the different activities the center will carry out.

“Sisodia believes that there is unique talent at the Tec, from students to staff. He believes that, through the Tec, Conscious Capitalism will make large strides in Latin America,” Molina said. 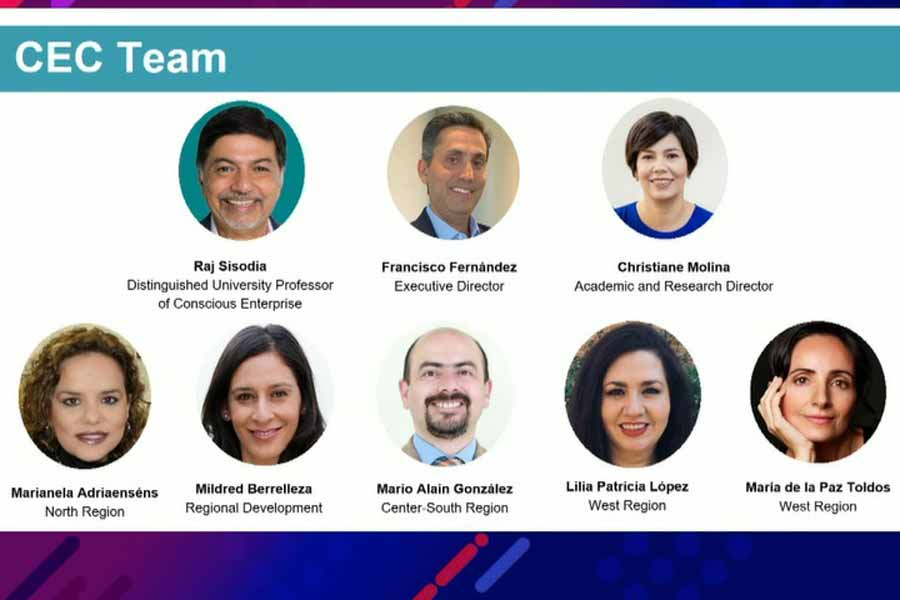 Those forming part of the Conscious Enterprise Center

The Conscious Enterprise Center will be made up of the following members:

Who can take part in this center?

YOU’LL DEFINITELY WANT TO READ THIS, TOO: