The presidents of Tec de Monterrey and Arizona State University are analyzing the importance universities have in creating a better future.
By Asael Villanueva | Redacción Nacional - 12/09/2020

During a virtual talk, the presidents of Tec de Monterrey and Arizona State University (ASU) shared their reflections on the important role of universities in changing the future.

David Garza, rector and executive president of the Tec, and Michael Crow, president of ASU, spoke at the event entitled “Is Your University Designed to Create a Better Future”, held on December 8.

Both directors agreed that universities must go beyond the academic to impact social, economic, and other contexts not only to adapt but also to define the future.

“We always need to think about the impact universities are having and how we can continue to have that impact,” Garza said.

“We have to adapt. The pandemic is an opportunity to move forward and to learn how to prevent it from happening again,” Crow said. 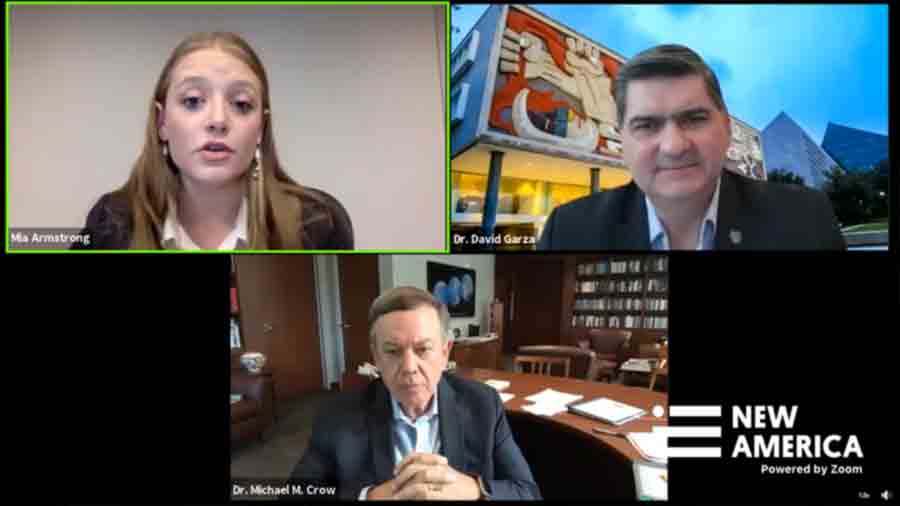 The “fifth wave” in education

Crow mentioned that universities have undergone changes for decades and that there is currently a fifth stage, which they also referred to as “the fifth wave”, on which both the Tec and ASU are collaborating.

The ASU president mentioned that this process has been going on for about 400 years.

Universities have moved from a classic vision where they taught only a select number of people, to being, in the present, capable of adapting to change.

“The fifth wave is an immersive approach. They are also institutions with a big technological presence,” explained Crow.

Garza added that universities such as the Tec and ASU are adapting to the needs of society in order to have a positive impact.

“We understand that, as a university, we have missions that are educational, for research, and for contributing to the economy,” added Garza.

We focus on accessibility, open-access knowledge, and the improvement of society, as well as resilience and the opportunity to exploit human potential.

Aspects such as these must, both presidents confirm, exist for a university to be capable not only of adapting, but of defining the future. 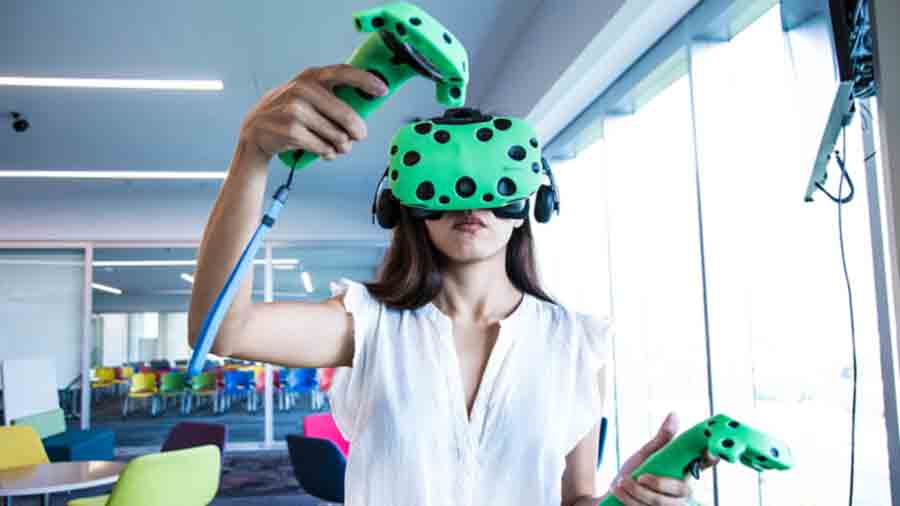 David Garza mentioned that the Tec’s strategy has been to pay attention to 3 essential issues: innovation, research, and internationalization

“The world changes quickly: it is volatile and complex. When our students graduate, they will have to get jobs which do not yet exist and will have to find solutions to problems that have not yet appeared,” he said.

One of the changes mentioned by Garza was the implementation of the Tec21 educational model, whose core pillars are challenge-based learning, flexibility, inspiring teachers, and a memorable environment.

These involve real-world challenges which allow students not only to develop their academic skills but also other life skills. 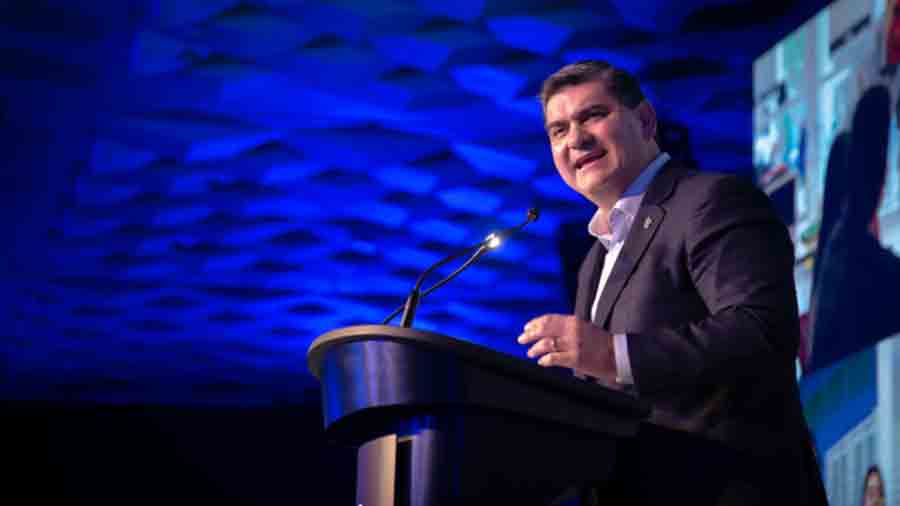 Similarly, Crow said that Arizona State University has designed an environment that is both adaptive and flexible for students.

One of the aspects mentioned by Crow was the need to increase value not only for students but also for the general population.

He even mentioned that they have thought about future issues such as space exploration and interaction with other species and ecosystems.

“Humans are not going to be on this planet forever. We are already thinking of working on that.

How do both universities promote innovation and research?

Garza mentioned that they have sought to establish an environment for innovation to happen more easily for Tec researchers.

“We have annual research events. We also fund research that we are promoting and to which we want to contribute,” he added.

Similarly, Crow pointed out that ASU has sought to facilitate its staff working on multidisciplinary projects.

“We’ve given our teachers the ability to not just to be staff. We’ve made it easier for them to contribute,” he said.

For both presidents, another essential focus that universities must have if they want to define the future is cooperation between them.

“In North America there are approximately 500 million people who live in one of the world’s largest economies.

“Yet we have not been able to work together on important issues such as water management, for example,” Crow said.

One of their messages was that facing challenges with a long-term vision benefits not only one institution, but can benefit several of them and even several countries.

Given this need, both institutions have worked on the topic of internationalization through exchange programs and by working on joint initiatives.

“We want to develop internationalization by tackling global problems which will also help us locally,” Garza said.

One example of the work that both universities have done together is a wastewater monitoring initiative to find signs of COVID-19 in Nuevo León.

This project is being worked on by Tec and Arizona State researchers, the Nuevo León Health Ministry, and Monterrey’s Water and Drainage Services. 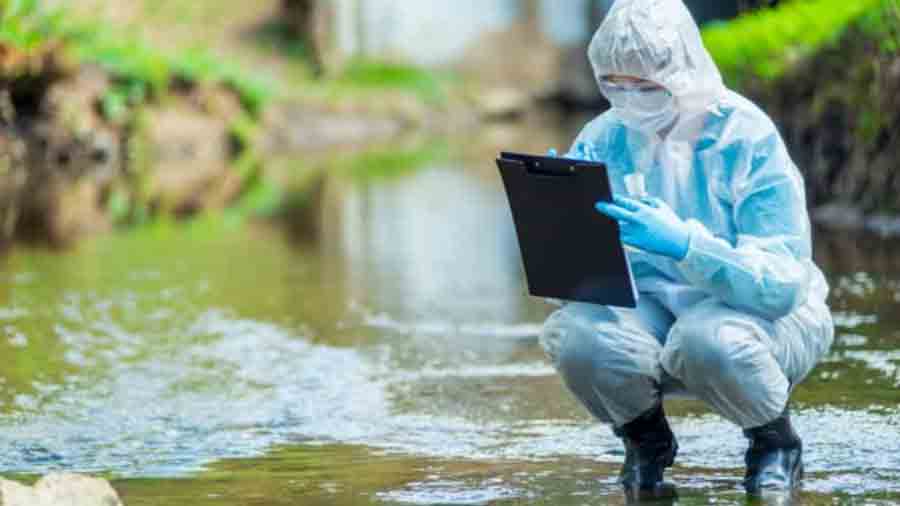 Challenges of the pandemic and opportunities to adapt

“The pandemic got out of hand and universities, in general, have not figured out how to collaborate and work together,” said the ASU president.

Crow also said that crises should not be solved in the moment but, rather, should be prevented and, thanks to the current pandemic, new models for cooperation are being developed.

In addition to the pandemic, both presidents mentioned that there are challenges that the future will bring, and that it will be necessary to work together to adapt to them and to solve them.

The scarcity of water, mass migrations, global warming, technological advances, and autonomous systems, were some of those mentioned.

“This crisis has taught us that we can make bold decisions that are very different from those we were taking before. Cooperation between global universities will be essential.

“Individually, we don’t have all the capacities, resources, and experiences. Complementing our skills is the key,” said Garza.

Both presidents closed the virtual event by signing a memorandum of understanding between both universities.

Founded in 1885, ASU has risen to position itself as the #1 American university in U.S. magazine’s rankings. It is considered one of the “The most innovative universities” by News & World Report and, since 2005, has been an outstanding research institution.

In recent years, the Tec and ASU have reinforced their exchanges, research projects, participation in forums, and other activities.

For example, since January 2009, Tec students with a master’s degree in Engineering with a focus in Quality and Productivity Systems can access an online certification from ASU.

During the first six years of the agreement, a total of 225 students received the Black Belts in Six Sigma (BBSS) certification, which is taught by professors from both institutions.

A program created by the ASU’s Center for Law and Global Affairs has also emerged from this international partnership. In 2018, it brought legal clinics and oral litigation training to the Tec to strengthen the new criminal justice system in Mexico.

In terms of sports, American Football staff at the Monterrey campus visited Arizona State to learn techniques and strategies, such as the use of software and technology for game analysis and videos, from their coaching staff.

In June 2019, the ASU women’s soccer team visited the Borregos Stadium to play and give clinics and talks.