“Because of COVID-19 I studied at home, took my exams at home, and graduated at home. Like many of you, I don’t know what will happen next in my life.”

The activist for girls’ education told Tec graduates that, faced with the challenges the world has due to the pandemic, they need be even more committed and, at the same time, open to change.

“Always have faith and believe in the cause you are fighting for. You have to believe in yourself; you have to be committed. You will hear this from many people.

“I look forward to seeing what all of you will do to make our world a better place. Go out and change the world,” urged Malala. 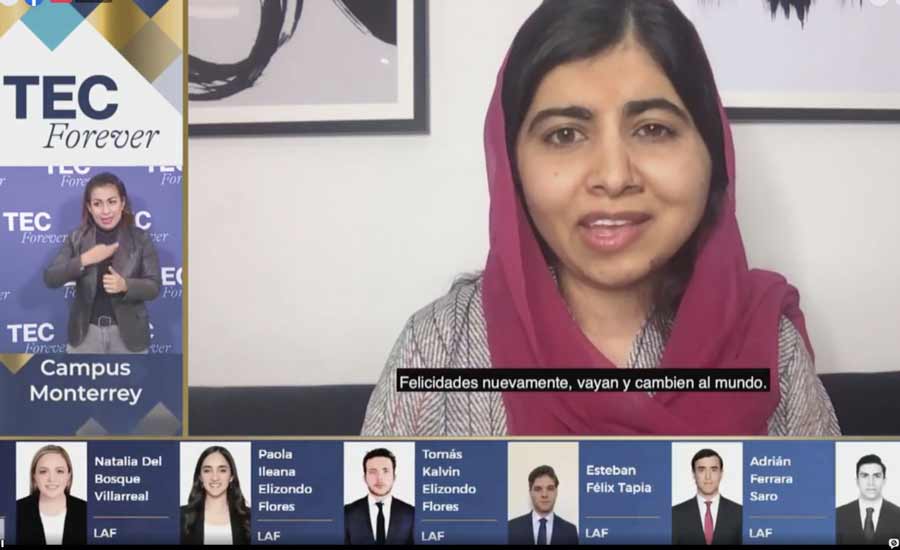 The 23-year-old said that life will bring problems, difficulties, and challenges, but that the graduates should think of them as learning experiences and opportunities to improve.

Malala gave a speech to the 4,735 undergraduates, 1,367 postgraduate students and 50 medical students, as well as directors of the institution and relatives of the graduates, among others.

This is the second time that Malala Yousafzai has given a message to the Tec de Monterrey community; in 2017 she visited the Santa Fe campus on her first trip to Mexico.

“Today is an important moment in your lives. You have worked hard and today you deserve to celebrate it,” said the young woman.

An invitation to change the world

During her message, Malala invited young people not to give up in the face of adversity, even in the midst of a pandemic, to fight for their dreams and ideals, and to change the world through their perseverance and active participation.

She said that it was frustrating to see how long it is taking to cut carbon emissions, to see women get equal pay, and to see all girls in school.

“I am not happy to wait many decades, or even centuries, to see equality around the world, so we need to be more active, more committed. We need more and more of you to commit to playing a role in this change. You have a lot of responsibility on your shoulders,” she said. 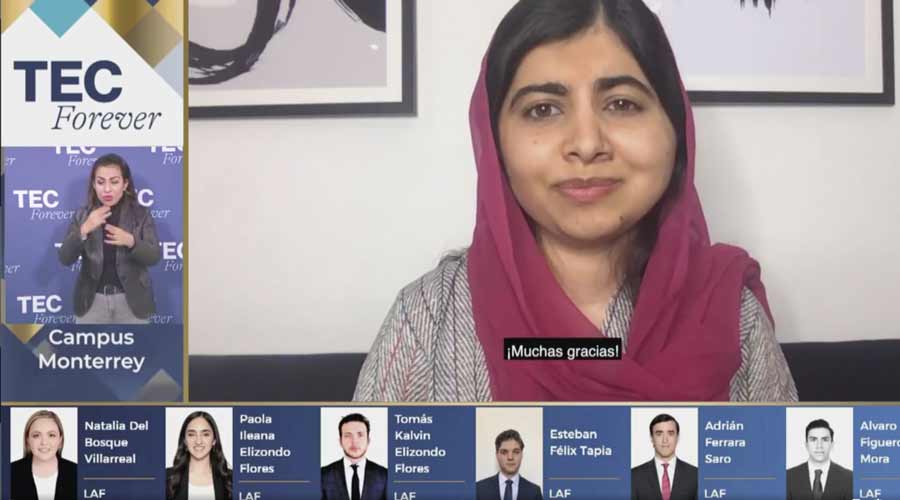 In response to reports of violence against women in Mexico, Malala asked men to take part in, and spread the message of, always treating women fairly and with respect, and not harassing them.

“When you see that something is wrong, you must speak up, say something; you must not allow this problem to continue. Sometimes it’s just a single voice, a single action, that causes change. Don’t underestimate the impact of an action that you have just carried out.”

Malala explained that it has been her responsibility to correct her own brothers when they said something inappropriate, reminding them that women should be treated equally and with respect.

“Women have the same rights as everyone else. It is important to remind men that women face many difficulties in their lives, and that they should be supportive. When you see injustice, you must speak up.”

“I look forward to seeing what all of you will do to make this world a better place. Go out and change the world.”

During her message to the December 2020 graduates, the young woman told the story of how she became an activist when, at the age of 11, the Taliban regime banned education for girls in northern Pakistan.

“My education was taken from me. I started speaking on local, national, and international media including writing blogs for the BBC, and being interviewed on NYT, CNN, and other platforms.”

Malala became an international symbol for the struggle for girls’ education by surviving an armed Taliban attack on October 9, 2012 for opposing their restrictions.

After recovering in 2013, she and her father founded the Malala Foundation to raise awareness about the social and economic impact of girls’ education.

“My father and I became activists, and we began to believe that change would not happen by itself, that we had to do something to make change happen,” she said.

Currently, the Malala Foundation is fighting for the defense of girls’ rights in 8 countries including Brazil, India, Nigeria, and Afghanistan.

In 2014, at the age of 17, Malala became the youngest person ever to receive the Nobel Peace Prize. In 2017, The United Nations named her a Messenger of Peace.

“My father and I became activists, and we began to believe that change would not happen by itself, that we had to do something to make change happen.”

José Antonio Fernández, Chairman of the Tec de Monterrey Board, congratulated the students and invited them to keep fighting for their communities,

“Today, you take on a great responsibility to our country. Don’t stop growing into the best possible version of yourselves.

“In such challenging times, don’t do anything out of selfishness, vanity, or financial interest, but rather with humility and curiosity and, above all, with the aim of giving something of value to your communities.”

Similarly, David Garza, Rector and Executive President of Tec de Monterrey, highlighted the efforts graduates had made to overcome the circumstances caused by the pandemic.

“I anticipate that, as happened in this last stage of your studies, you will face many challenges on the way to reaching your goals. Never give up. Obstacles are there to identify how determined and convinced you are about what you want.

“If your conviction is strong, you will always find a way to overcome them, as you have done thus far,” Garza said.

In mid-2020, the Tec transformed its educational model to continue with both academic and leadership classes, as well as areas such as sports and wellbeing.

In addition to academic continuity, Garza recognized the work of teachers and staff who participated in initiatives for wellbeing and students’ physical and mental care.

Juan Pablo Murra, Rector of Undergraduate and Graduate Studies, asked all new graduates to be innovative and capable of adapting to new circumstances.

“We are very proud of you. We will bear witness to your achievements and your battles. Know that you can always return to your home, the Tec, to continue learning, beginning new projects, and connecting with the rest of the Tec community,” added Murra.

Tec Forever was a national event held on December 16 to virtually celebrate December 2020 graduates. In addition, students will have a virtual ceremony for their local campus.

Students will receive their certificates via blockchain, making it easier to verify their validity around the world.

The Tec was the first Mexican university to offer official certificates via blockchain and this is the fourth occasion on which it has done so; the first time being in May 2019. Last June, at the first ever Tec Forever event, Hillary Clinton, the former first lady of the United States, was a guest speaker.

A community both within Mexico and around the world

During the live broadcast, some graduates and family members gave testimonies about their experience.

These are the symptoms of the Delta variant

Transformational Leadership and the Future of Business