Playing and learning! Here’s how gamification can motivate students

Incorporating elements of video games into classes means students want to learn, said an expert from Hong Kong at the Tec’s education conference.

When he was in fourth grade, Wong had reading difficulties. Shortly afterwards, he was given a game-based self-study program that helped him catch up with his classmates. One day, he even surprised his mother by coming home with 16 books to read!

“That’s the power of encouraging self-learning,” said Dr. Samuel K.W. Chu, a professor at the University of Hong Kong, who has focused his research on areas such as gamified learning and social media in education.

During his talk at the Tec’s 7th International Conference on Educational Innovation, he said that these alternatives have taken on a greater importance given the challenges that have arisen for education in the context of the COVID-19 pandemic.

“During the pandemic, lots of people have focused on how to teach students, but very few have talked about how we can design something that allows students to learn on their own,” he reflected in the talk. 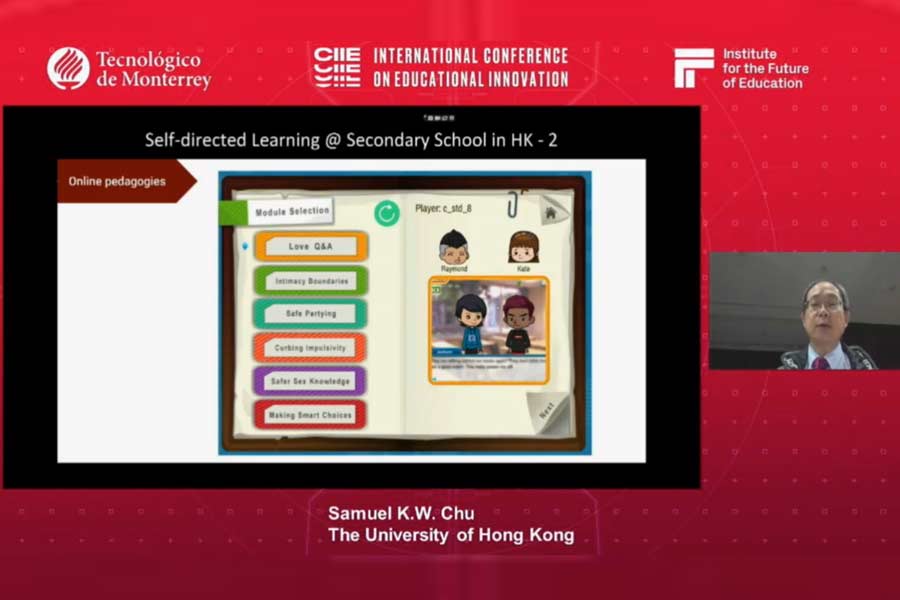 “Even if you find the best teachers in the world, it still won’t be as effective as designing something that motivates your students to learn autonomously, with their full devotion and eagerness,” he explained to the attendees.

Gamification: effective at all stages of education

In an interview for CONECTA, the expert said that gamification strategies in education work at all stages of education, across all subjects, and even in learning different languages.

“The trick here is to include gaming elements such as earning points, leveling up, recognizing achievements with lots of fanfare, and telling students they did a good job.

“Students like all of this and that’s why they keep doing it: because they feel good, at ease. They have fun and they are motivated to continue learning,” Chu said.

The professor suggested combining gaming elements such as points, different levels, leaderboards, and competitions with texts, videos, and other content that is useful for teaching.

“If you combine these two aspects, having students prepare at home, either by watching a video or reading a chapter, and then answering some questions so they can level up, earning points, then they’ll have the incentive to do so,” he added.

Over the last 8 years, Professor Chu has developed several projects that have had an impact on students at various stages of their education in Asian countries and even the Americas.

His most outstanding projects include two platforms, one of them consisting of a reading contest called “Reading Battle”, and the other named “Making Smart Choices”, which provides young people with sex education.

- Battling to improve reading and writing

Chu explained that this free platform has helped young students learn to read and has even helped them to write better, teaching them to enjoy and get into the habit of reading.

“Essentially, we work on reading comprehension and it’s something that’s exciting for the students. It includes gaming and platform elements, so they don’t see it as an exam but rather a challenge that includes many achievements and a lot of success.

“If they want to do more, they just have to read the books and log onto the platform to answer questions, which are not that easy. This makes them try harder to find the correct response: they ask questions and discuss them with their family and friends,” he explained.

The professor shared that, currently, there are more than 70 elementary schools using it in Hong Kong alone, and his program has had an impact on hundreds of students in the United States, China, Cambodia, and he hopes that in the future it will reach Mexico and Latin America.

The professor and his team have developed a platform providing sexual education to students in middle and high school, based on games and different scenarios.

“For example, in a dating simulation, the platform not only talks about safe sex, but includes a wide range of materials to teach boys and girls how to treat members of the opposite sex in an appropriate way.”

“It was a great success and the kids loved it. They said it was useful that we used scenarios similar to those in real life, and that they not only used it in the classroom but also spent a lot of time using it at home,” said Chu.

When using the platform, students were not afraid to interact with each other as they could use fictitious names and identities to maintain their privacy, he explained.

The expert also recommends playing video games in moderation, as research has found that this helps people’s performance.

“There have been at least two studies, possibly more, about Super Mario 64. They asked several groups of people to play it; some were young people, and some were older people, 55 to 70 years old.

“The results showed that those who played for 30 minutes a day for two or three months generated new thought processes in the brain; their gray matter began to improve their ability to think,” he said.

He explained that the results were encouraging in the group of older people, since there were indications that it stops the brain from deteriorating.

“The study was very interesting. For older adults, it was good news not only to see that the brain didn’t have to deteriorate as people got older but also that perhaps it could be rejuvenated through moderate playing,” he shared.

However, he did warn that time is a factor to take into consideration as those who began to play video games for much longer first increased and then decreased their abilities.

Finally, Dr. Chu suggested combining learning with other games that stimulate the brain, such as those that work to develop memory.