Conrad Wolfram tells the International Conference on Educational Innovation that mathematics in education must adapt to the future.
By Asael Villanueva | National News Desk - 12/15/2020

“When was the last time you used quadratic equations in real life?” asks British technologist Conrad Wolfram, raising a laugh from the audience during his talk at the seventh International Conference on Educational Innovation (CIIE), organized by Tec de Monterrey.

“The response I have received from acquaintances and friends is: ‘Never. Except when I have to teach it to my kids.’”

Wolfram smiles as he says that the problem with the current process of teaching mathematics is that it forces students to go through a lot of areas of math and tells them that this is essential.

“In real-world mathematics, computers do almost all of the work, but in mathematics classes, people do all the work,” Wolfram said. 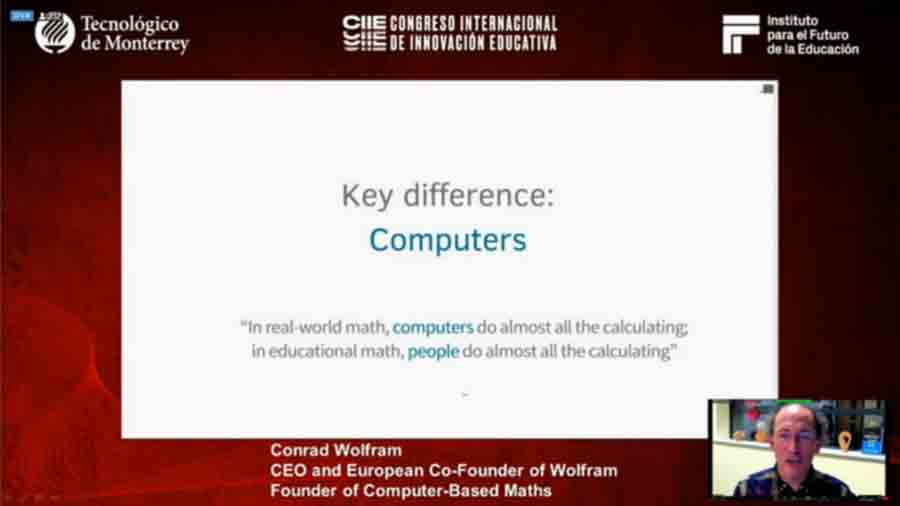 An evolution which avoids mathematics

What Wolfram proposes is replacing the long manual process and allowing students to better understand problems and apply their solutions to the real world by using computer-based mathematical thinking.

Wolfram says that mathematics has evolved through the use of computers in areas such as health and biology. Despite its importance in contemporary life, he believes that mathematics in education has undergone few significant changes.

He mentions that mathematics is a 4-step process: first you define a question. Then, that question is written in a way that can be calculated. What follows is a process of calculation and resolution. Finally, the results are interpreted.

However, the expert mentions that mathematics education focuses heavily on step 3, the calculation and resolution process, in which students solve long equations by hand.

“Why do we force students to do this? Why can't we get them to use the technology they already have?” asks Wolfram. 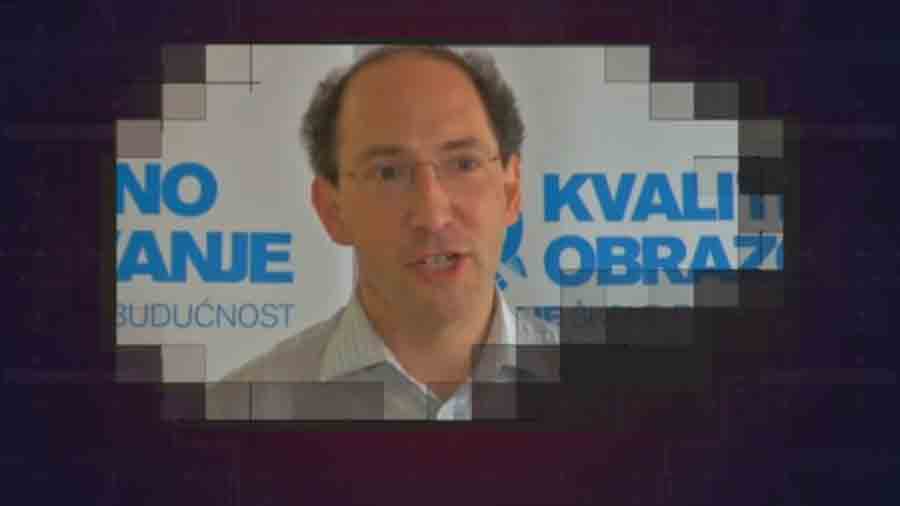 The solution offered by the British expert is to let computers do the work in step 3, manual calculations, so that teachers and students can focus on understanding and defining the problem, and identifying the information required to solve it.

That information can be turned into codes, diagrams, or algorithms that can be input into computers to be calculated.

Students should be able to interpret the results that the computer returns, make them understandable, and then test them in real-life contexts.

Wolfram says that this idea is relatively recent and that, although it has not been widely adopted, there are already universities, businesses, and governments that are interested in the concept.

“Computing can be applied to many different subjects, such as sequencing the human genome. A decade ago this would have been impossible to do.

“If I told a scientist 100 years ago that there would be a computer which could do the life’s work of a mathematician in 1 second, he wouldn't have believed me,” says Conrad. 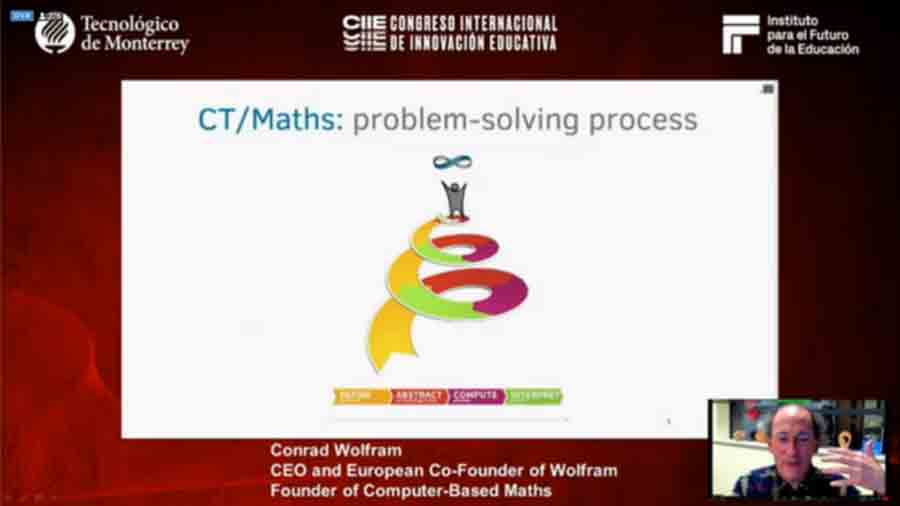 Will students only learn the basics?

Wolfram says that although this is beneficial, there are others who think that mathematics education should remain as it is.

Wolfram believes that education should not be based only on technology, but should definitely be aided by it. He also says that it is necessary for students to understand the different concepts, but that the calculations, especially the most laborious ones, could be left to technology

For example, in his book, The Math(s) Fix, he shares a case in which students analyze cyclists in a competition.

Through data analysis, the students learned to investigate concepts such as air speed, the resistance of bicycle chains, and form those ideas into data that can be calculated.

As a result, they were able to get the cyclists to improve their performance. These are skills which Conrad believes are necessary for the industrial revolution 4.0 that we are currently experiencing. 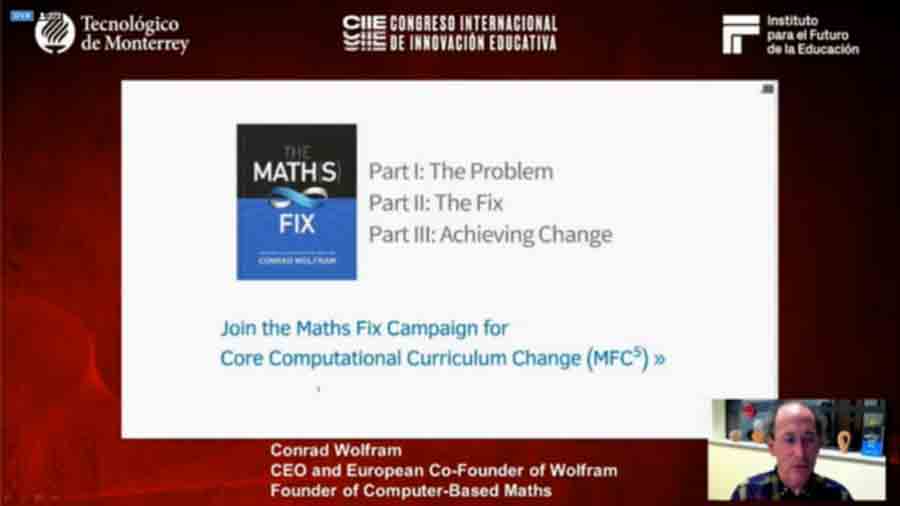 “New mathematics” in the future

Wolfram has worked with governments and universities on this topic and has even developed Mathematica, a project using technical computing for research, development, and education.

He has also created WolframAlpha, a computational intelligence site where you can search for various topics such as science, history, and even hobbies, to name but a few.

However, the expert believes that this change in math education is not something that can happen quickly.

“It’s easier in universities like Tec de Monterrey, where you decide your curricula, but it’s more complicated in secondary schools for example,” he explained.

Other difficulties include the digital divide, especially in countries where people don’t have access to technology.

However, the speaker says that access to computing is not as expensive as it was before and there are simple ways to do it through low-cost smart phones.

“I strongly recommend that governments ensure these technologies are available to everyone.

“Countries or universities that start doing things this way sooner will have the tremendous advantage of being the first to do so,” he said. 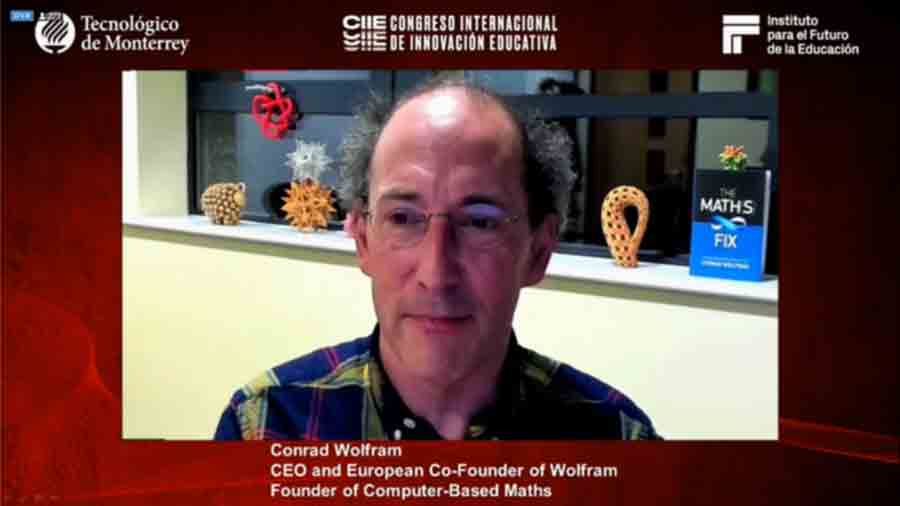 This is the 7th Tec de Monterrey International Conference on Educational Innovation.

The event is held annually and for the first time virtually on this occasion for 5 days from December 14 to 18, 2020.

“At CIIE, we identify current challenges and opportunities in the world of education. We seek to promote new teaching-learning methods, and the tools that new generations demand,” said David Garza, the Tec's rector.

More than 4,500 attendees from 25 countries participated at this year’s conference, and had the opportunity to listen to 25 university rectors and more than 70 international experts.

In addition, virtual exhibitions and awards such as the TPrize were held in association with the University of Los Andes and MIT.

Playing and learning! Here’s how gamification can motivate students