David Garza, president of Tec de Monterrey, spoke about the challenges that education will face in a post-pandemic world.
By ASAEL VILLANUEVA | NATIONAL NEWS DESK - 12/14/2020

David Garza, rector and executive president of Tec de Monterrey, reflected on the future of education once the COVID-19 pandemic has been overcome: he believes that it will be a combination of in-person and virtual formats.

“I don’t think the in-person university will disappear [...] It will not be solely online or in-person, but rather hybrid,” Garza pointed out during the inauguration of the 7th Tec de Monterrey International Conference on Educational Innovation, which took place virtually for the first time.

He also shared that equal access, the digital divide, new strategies for teaching, and student mental health will be the biggest challenges after the pandemic.

The rector also pointed out that the pandemic came at a time when technological changes were already in process and made them happen earlier.

“What we have is the collision of two storms: one that came with the fourth industrial revolution and the other with COVID-19. Things will not be the same again,” he said. 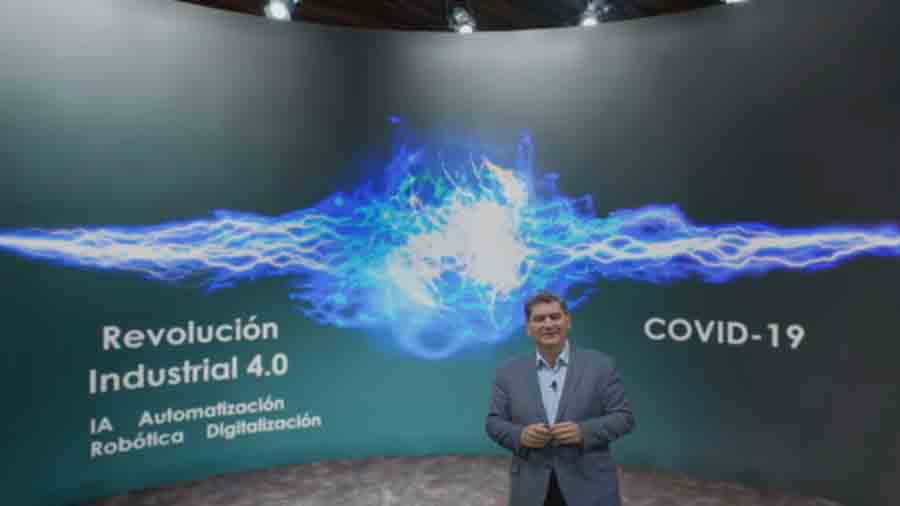 One of the reflections Garza shared had to do with in-person education in the future.

He said that post-pandemic education could be complemented with hybrid online and in-person classes via new educational models.

He also mentioned micro-credentials, which are given to students to accredit certain skills without them having to complete a full degree.

These are becoming increasingly popular and universities such as Columbia, MIT, and Tec de Monterrey itself were already offering some online even before the pandemic. 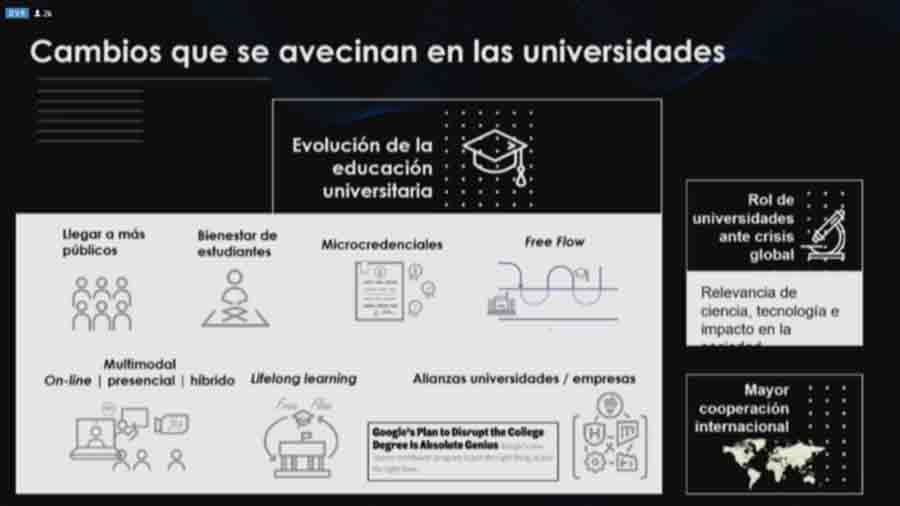 Another of the changes mentioned by the rector were the partnerships developed between different universities, as well as those between universities and companies.

“The pandemic has been an example of how we can contribute to society. Universities have been like black boxes, with all the decisions being made inside them.

“These boxes are being opened and decisions will be complemented in collaboration and synergy with other potential stakeholders,” Garza said.

He also told the audience that the most important thing is to find ways to add value to what students will be able to do when they graduate from their degrees.

One of the main changes in education brought about by the health crisis was in the way teaching happens.

However, distance education began in 1858 with the first classes by mail offered by the University of London, Garza said.

“1966 was also a year of evolution (in distance education) at Tec de Monterrey with classes filmed using closed circuit television,” recalled the rector.

With the arrival of the pandemic, the Tec and other universities around the world innovated ways of offering classes responsively and quickly.

“(At the Tec), more than 1.3 million online class sessions have been taught by more than 10,000 teachers,” explained the president.

In addition to the academic area, Tec has also carried out more than 250 social impact projects by providing educational resources and collaborating with NGOs.

“From the manufacture of ventilators, treatment, and support for different organizations, and through TecSalud’s great leadership, more than 29 protocols were developed and more than 2,000 patients treated,” he added.

Another aspect that Garza mentioned was taking care of the mental health of students and the community in general, as well as events to provide a memorable experience, even in the pandemic.

“This week we have Malala as a guest speaker; we also welcomed Bill Gates, who met the chairman of our board and some students.

“We have implemented financial support programs, followed up on student and employee COVID cases, as well as supporting opportunities to work from home,” he said. 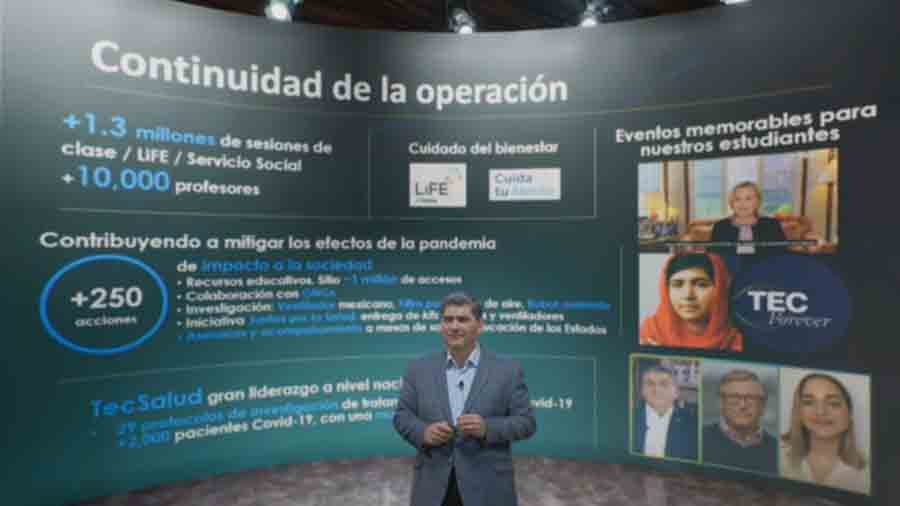 Similarly, the Tec implemented initiatives that were already being developed prior to the pandemic:

The room has screens that provide teachers with a panoramic view where they can see their students, their presentations, and make use of technology in class.

Garza also mentioned the use of specialized software to provide laboratory experiences to students who can control them and their simulators from home.

The beginning of the future of education

Garza mentioned data from analyst surveys that foresee changes in education in the future.

“More than 25,000 adults in more than 25 countries were surveyed about how they perceive higher education.

“The big conclusion is that the future will happen via hybrid education, and that the consumption of video (including online courses) has increased,” he said.

Another aspect addressed by the rector were the challenges that online education will bring for future cohorts.

Learning gaps, issues with socio-emotional development, and even young people’s appreciation for social interaction not being so much online, were some of those mentioned by David Garza.

He also mentioned that one of the main concerns is promoting students’ emotional and physical wellbeing.

“These are elements that will continue to be there even when the pandemic is over. As educators, this is what we are going to be living with,” he shared.

This is the 7th Tec de Monterrey International Conference on Educational Innovation.

The event is held annually and (for the first time) virtually on this occasion for 5 days from December 14 to 18, 2020.

More than 4,500 attendees from 25 countries participated at this year’s conference and had the opportunity to listen to 25 university rectors and more than 70 international experts. 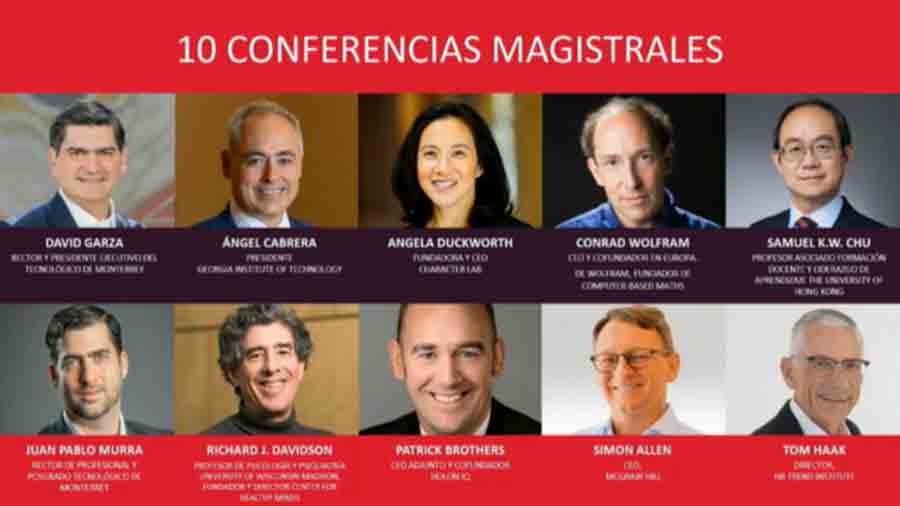 In addition, virtual exhibitions and awards such as the TPrize were held in association with the University of Los Andes and MIT.

“If you’re interested in a topic that isn’t your specialty, you can also join the conference.

“One advantage is that the conference is virtual, and the talks are recorded so you can access them afterwards,” said José Escamilla, the Tec’s Director of Educational Innovation. 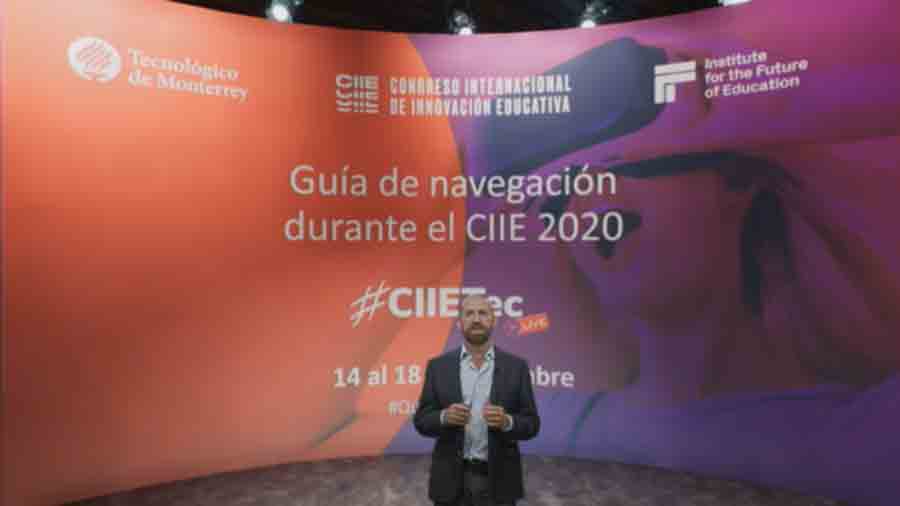 Together vs COVID-19: the mexican ventilator made by companies and Tec