How these 5 teachers reinvented themselves to teach online

Five teachers from Tec de Monterrey discuss how they reinvented their classes for an online format.

When they received the news that face-to-face classes would be suspended in Mexico, these teachers began to plan how they would continue their lessons.

Five teachers who had to reinvent their classes due to the quarantine caused by the global COVID-19 pandemic told CONECTA how they did it.

Some of these professors have been recognized by Tec leaders such as Rector David Garza for their creativity in reinventing themselves.

Iliana is a teacher in the Law Department at the Mexico City campus and has been recognized as one of the most influential lawyers in Mexico by Foro Jurídico magazine. 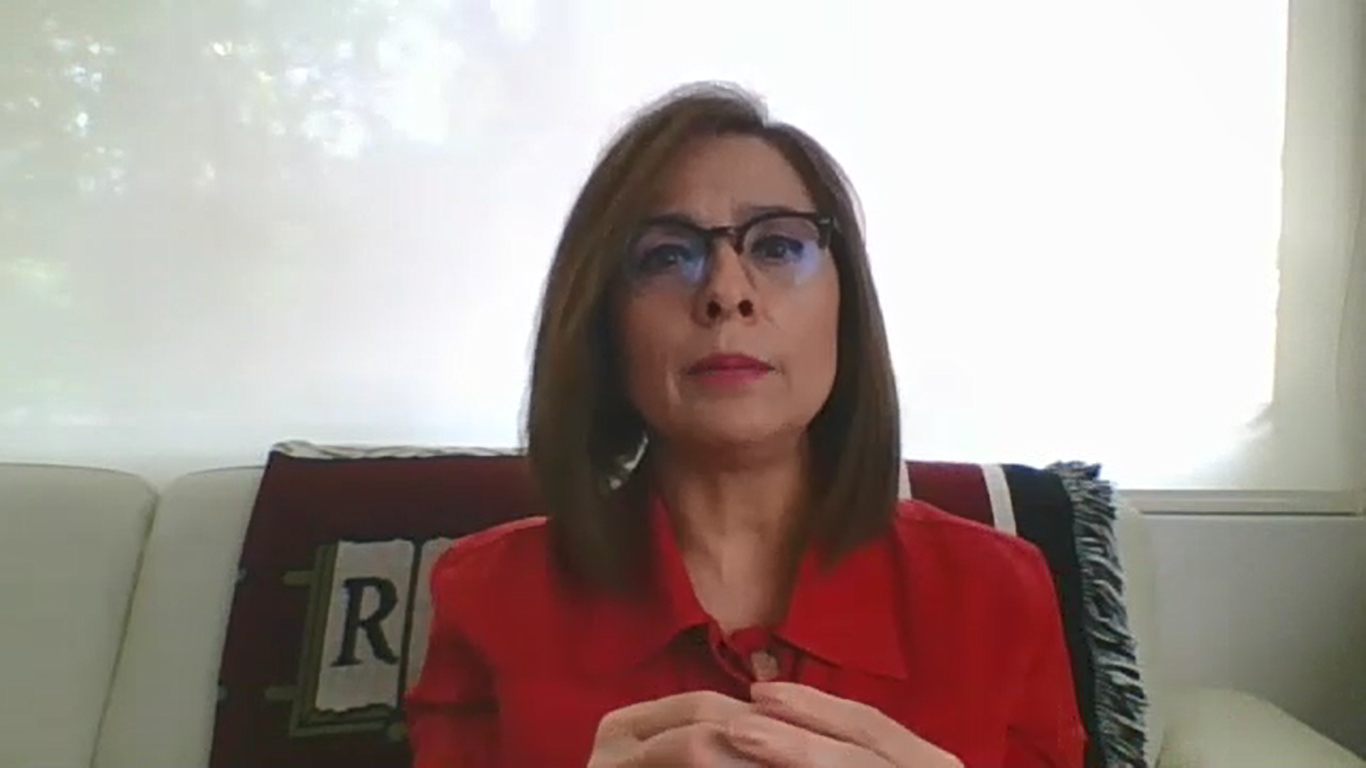 Within the online class format, Iliana structures her class into blocks, beginning by welcoming and asking about her students.

After this, she uses tools like Kahoot! with questions that measure how much progress student have made, followed by the theoretical part and promoting interaction in the group.

“Sometimes I also play a short video for them depending on the relevance and we work in teams through Zoom. Something important for my class is to bring in an expert guest on a subject,” she said.

Her guests have included directors, experts on legal cases, and even a former consul from the US city of Seattle.

“I don’t improvise. I plan my classes. When the 2017 earthquake happened in Mexico City, we had to reinvent ourselves as well.

“Now, with the arrival of the pandemic, we’ve been forced to dust off what we’d already learned,” said Iliana.

In addition to her classes, Iliana participates in webinar sessions on various legal topics with experts from Latin America aimed at colleagues, students, and graduates of related degrees.

Sergio is a professor of Strategy and Leadership at the Aguascalientes campus. 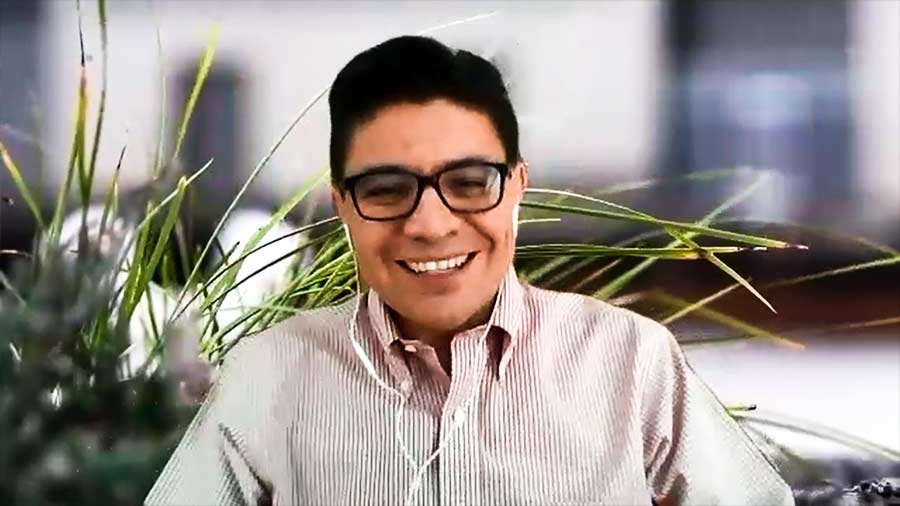 He teaches strategic sustainability and planning, communication and ideation, and prototyping.

One of the main challenges that the pandemic brought to his classes was that of contact with the companies that his students worked with to solve challenges.

“We spoke with a car manufacturer in Aguascalientes. At the beginning, they didn’t listen to us, but fortunately we met over Zoom and they allowed us to continue the project,” Sánchez said. 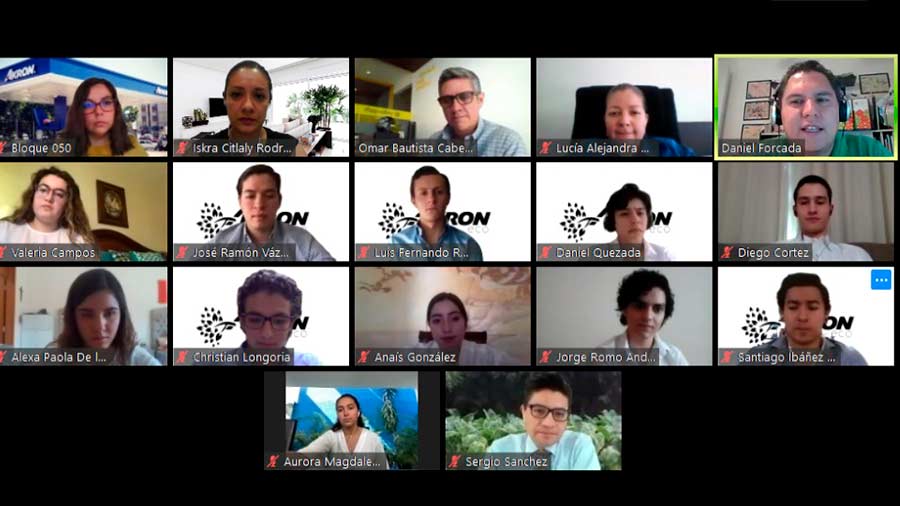 Traditionally, the students would visit the plant as part of these projects. Now, they work with observation exercises shared between the students and the members of the company.

“Our students were analyzing small parts; instead of a visit, they worked on this project in parts and it worked,“ he added.

Sergio says they had to reinvent the prototyping classes in the same way, where his students now have to make sketches and use simple materials that they have at home to do the practical side.

“The students are very creative; they all had the same background during the video calls, and they made videos of a client’s process through video calls.

“Our classes at the moment exist for both relief and focus. Sometimes, it’s the only interaction that allows our students to vent,” he added.

Gerardo teaches the Financial Management block of the Tec21 Model and this is the second time he has taught this course:

Once in the classroom the previous semester and online this year. 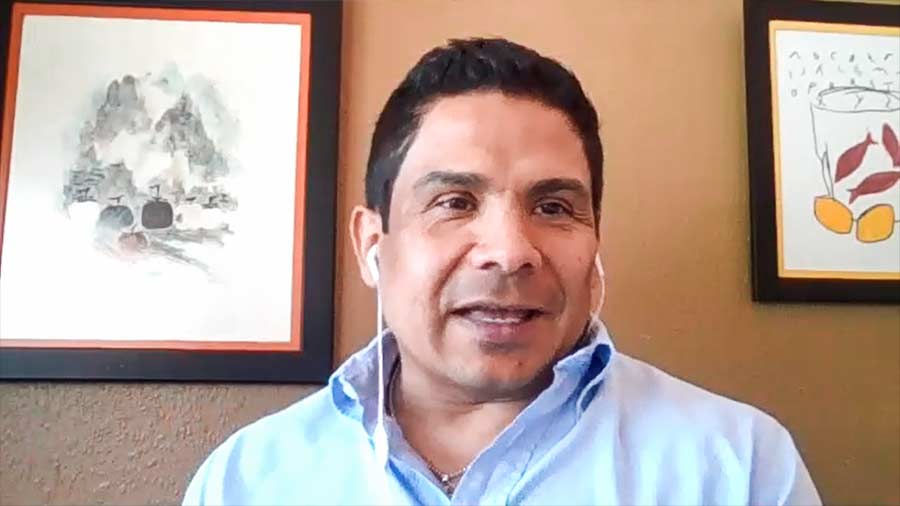 One of the characteristics of these courses is that learning occurs by solving real-world challenges, so the quarantine presented an opportunity.

“Instead of me explaining a method such as pricing a product, I ask them how they would do it, and we construct that method through their contributions,” Tobias said.

When the price of oil fell, Gerardo remembers that he chose not to use the example he had prepared and worked on that story to explain the issue of inventories and costs.

“We asked them if they knew how much storage capacity Mexico has for oil; as it does not have so much, they cannot keep it and that makes the price drop because they need to sell it,” he said. 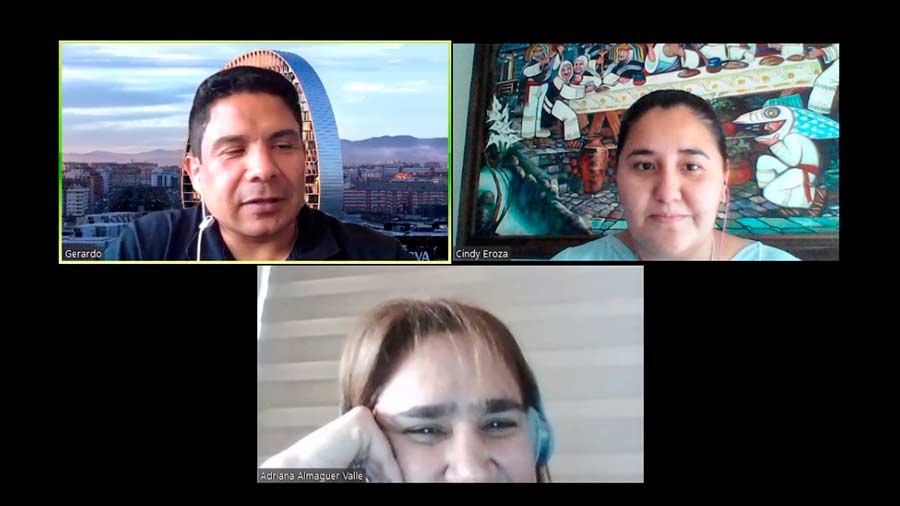 What’s more, when he used these techniques, Tobias recalled that there were sessions that ended a little later than usual.

That’s because the students continued participating when they were interested in a current, real, and visible topic about their environment.

“In the teachers’ evaluation, the students told us they really liked that we made the news of the day part of the material used in the classes,” he said.

Miguel is a professor at the School of Engineering and Sciences on Puebla campus and has run a YouTube channel since 2009 with more than 500 videos on topics related to architecture and civil engineering. 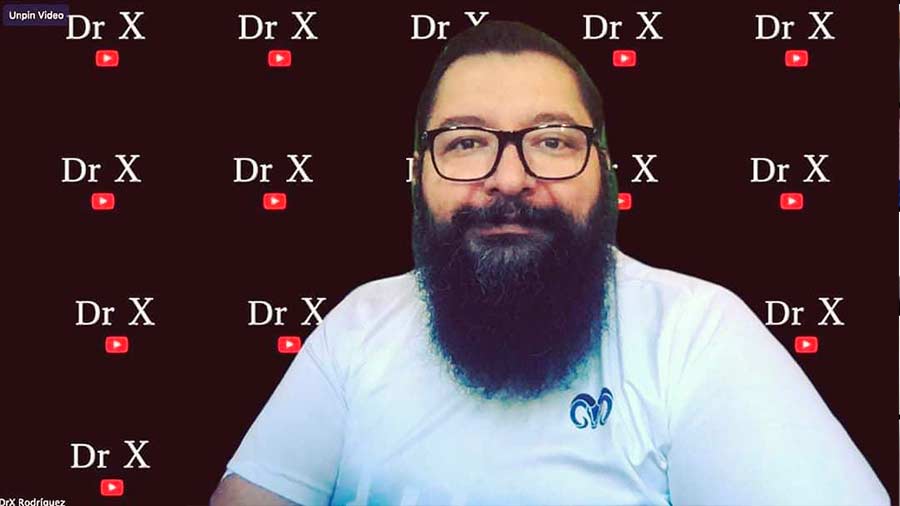 During this quarantine, Miguel has used the videos from his channel as support material for his students, with whom he also holds video calls for team activities and group sessions.

“I don’t like holding video calls with the students all the time. What I do is prepare material with videos.

“I make playlists with various videos. They watch them before class and then we discuss them and do team activities,” said Miguel.

In the same way, Miguel takes advantage of architecture reports and series that he and the students discuss live, so that they can complete activities in pairs or teams.

Documentaries like National Geographic’s “Megastructures” are an example of the supporting material that this teacher uses. 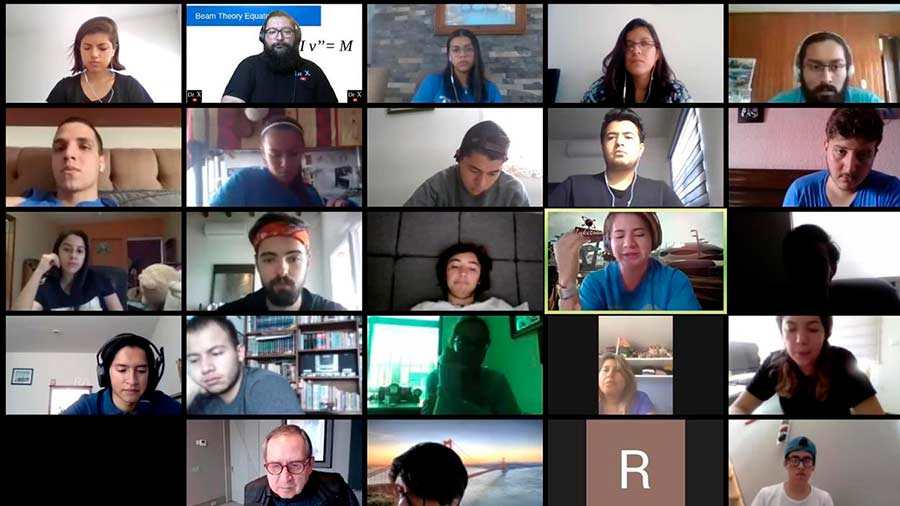 “I also believe that having an open channel of communication is important. I use Facebook to make groups for each subject so that students can do things like send messages and ask for advice,” said Miguel.

In addition to that, Miguel records tips for teachers which he uploads to his channel so as to collaborate with colleagues from other campuses and regions.

“It’s also important to feel how the group is doing. Sometimes you have to improvise. If something happened during the day, you use it for the class. If there was an earthquake, you talk about structures and terrain,” he added.

Diana is the director of the Music Production Engineering degree program and her post-production and digital mastering classes are mostly held in specialized audio laboratories. 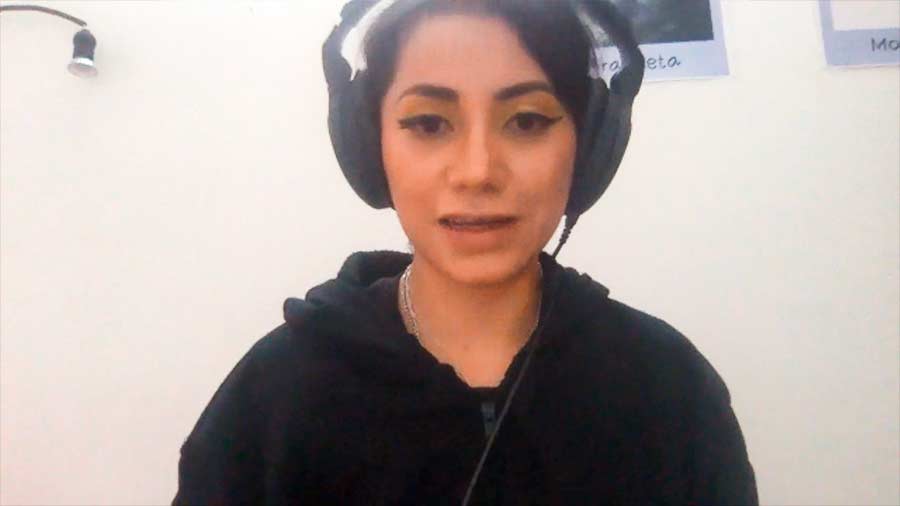 “At first, it was difficult. 80% of the sessions are practical and having a student in front of a computer wasn’t an option,” she said.

When they are in a face-to-face format, students play and listen at the same time, both to themselves and to their classmates and teachers, so taking these classes on the Internet would be difficult. 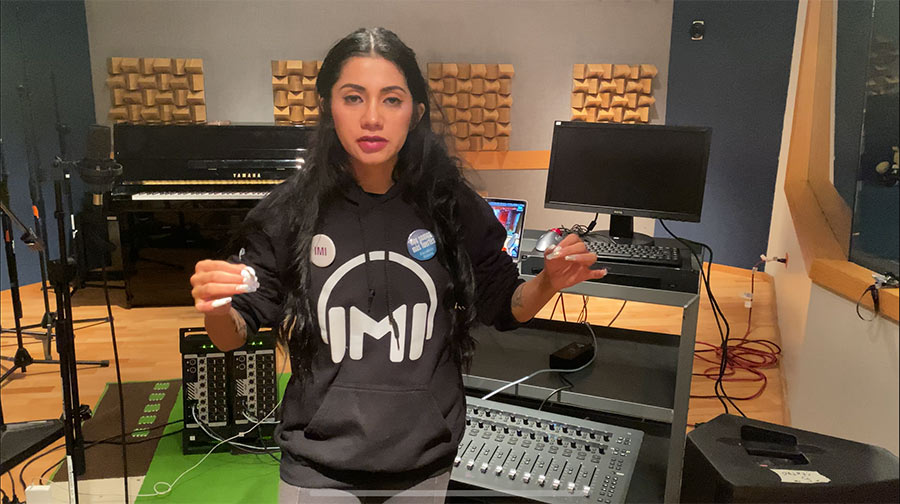 The challenge was to make the students’ sound systems sound good on the other end of the line.

“The problem was Internet latency, which varies speed. There were seconds of delay and there can be no delay in these classes,” she said.

To solve this, she began looking for software to synchronize her student’s audio during the video calls over Zoom and together with other teachers began to give advice on how to use it.

They used some plugins and software that certain companies had provided for free due to the quarantine.

With these, the audio is not compressed and so this allows for better sound during video calls.

Diana mentions that this format can give them experience of the work that some producers around the world are having to do during the emergency.

“That’s the way it is in the world of work. You present your work to your clients and you have to make it sound good. You have to set up your equipment well. It’s a challenge,” she pointed out.

Similarly, Diana holds some mentoring sessions through video calls to support colleagues and students inside and outside of the Tec.

Post-COVID-19 condition: the name for the after-effects of SARS-CoV-2

Could college be like Netflix? Jeff Selingo explains the flexible model

How to attack the ‘dark side’ of Artificial Intelligence through education