Human lens model recognized as the best in optics of 2020

Alfonso Isaac Jaimes-Nájera, a researcher at the Monterrey campus, along with colleagues from Mexico and England, uses a mathematical model to describe the anatomy and physiology of the human eye’s crystalline lens.
By Martha Mariano | Monterrey Campus - 11/27/2020

The crystalline lens is an internal lens within the human eye, located behind the pupil. This lens is responsible for us being able to observe things clearly at differing distances.

It achieves this via a process known as accommodation, in which the lens changes its shape as a result of the action of the ciliary muscles in order to modify its focal point.

During this process, both the external and internal parts of the crystalline lens change. This is difficult to describe because the crystalline lens’ surface is asymmetrical and its internal index of refraction is inhomogeneous. This means it has a gradient refractive index which changes at different points on the lens.

In order to describe the crystalline lens, a single-function mathematical model was developed by Dr. Alfonso Jaimes and his colleagues, capable of modeling the surface and the gradient refractive index at the same time within experimentally reported parameters.

“Our model is the first to describe the dynamic relationship between the external and internal part of the crystalline lens in the accommodation process using a single function. Previously, different formulas were used to describe each component separately. As a result, our model allows for a much more precise description of the lens.

“In this research we used biometric measurements of the lens, such as the radii of curvature, lens width, equatorial diameter, and values for the variation in the index of refraction, to be able to adjust our function so that our lens model was within reported experimental values,” explained Dr. Jaimes.

Alfonso Jaimes shared that the function which describes the lens is the product of both Poisson and Gaussian distributions, both well-known statistical distributions.

“Once we have our lens model, what we do is build a schematic eye, an approximate model of the eye, which takes into account the cornea, the lens, the pupil, as well as the aqueous humor and the vitreous humor, the latter being the liquid inside our eyes,” he explained.

“Then, we can study its optical behavior using computer codes that we developed. We found that our model, in addition to being accurate at the anatomical level, is also accurate optically, as our results agree with experimental data taken from human eyes.”

The Optics and Photonics News magazine produced by the Optical Society of America, makes a selection of the most outstanding optics articles worldwide each year.

The selection committee is made up of internationally recognized scientists. This year’s selection featured Dr. Jaimes’s research, published in June of this year in the journal Biomedical Optics Express, and entitled “Single function crystalline lens capable of mimicking ciliary body accommodation”.

You can read the full article here. 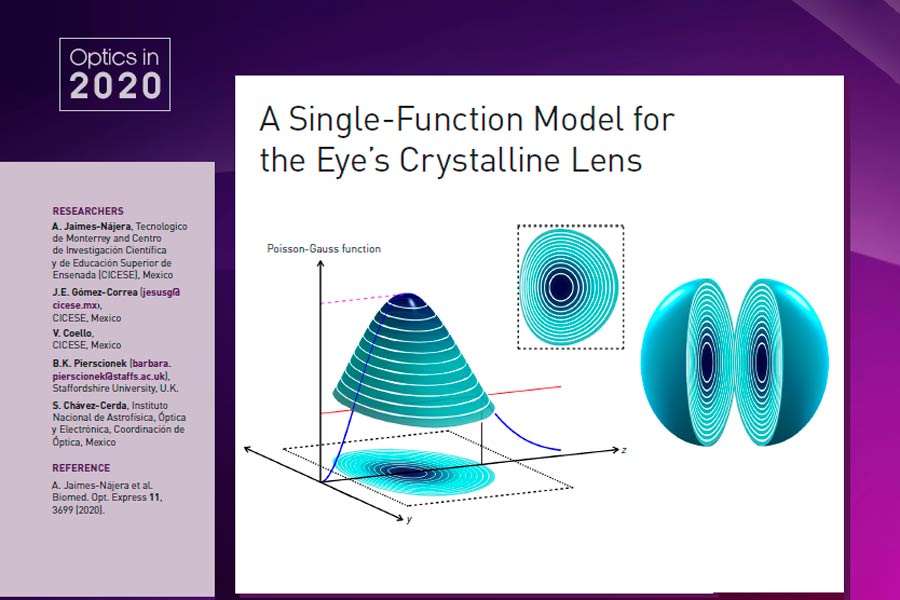 Besides Professor Alfonso Jaimes-Nájera, the other researchers who participated in this research were Jesús E. Gómez-Correa and Víctor Coello from the Ensenada Center for Scientific Research and Higher Education, in Mexico, as well as Barbara Pierscionek from the University of Staffordshire, in the United Kingdom, and Sabino Chávez-Cerda from the National Institute of Optical and Electronic Astrophysics, in Mexico.

It is important to note that in this year’s selection, this article was the only one selected worldwide in the area of Visual Optics, and the only one attributed to Mexican institutions.

Dr. Jaimes shared that this research can be used together with recent advances in tissue engineering or 3D bioprinting and could have potential applications for generating 3D-printed lenses.

“Right now, there are a very large number of surgeries for cataracts, which is a disease that occurs precisely in the lens.”

“Our function, which describes the human lens, could also be used to describe intraocular lenses, which could be very useful for these types of conditions,” he shared.

Finally, the professor acknowledged the support that Tec de Monterrey has given him to be able to continue with his scientific career, which has allowed him to present his work internationally.

“I’m proud to be able to give something back and promote Tecnológico de Monterey through this award,” he said.

These are the symptoms of the Delta variant

Transformational Leadership and the Future of Business